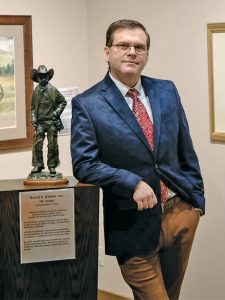 Scott Metelko ’88 became Executive Director of Chisholm Trail Heritage Center in Duncan, Oklahoma, in February 2020. He founded an entertainment design and fabrication firm creating themed environments in 1993 and has had extensive experience in museums, theme parks, and entertainment venues. Before the move to Duncan, he and his wife lived in Florida, where his work included Marco Island Historical Museum and Naples Depot Museum. He had previously been Executive Director for the Mid-America Air Museum in Liberal, Kansas.