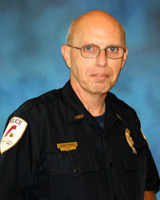 Chief Perry is not new to Austin College and is pleased to continue his work with the College. He said student safety is a strategic priority at the College, and he has been pleased to be a part of several advances and initiatives during his time on the College Police. ”Larry Caylor was instrumental in recruiting me to the Austin College Police, and I have been fortunate to have the privilege to serve under his leadership all of these years,” Perry said. “My hope is to build further on the foundation that he and his predecessors, John Blystone and John Ruff, set in place at this great institution.”

A Sherman native, Perry graduated from Sherman High School in 1976 and earned an associate’s degree in criminology before joining the McKinney Police Department in 1979. In 1982, he joined the Austin College Police Department and through the intervening years has had responsibility for several programs as the college expanded its security systems throughout campus. He has served as the department’s training coordinator, initiated a bike patrol on campus, and served as crime prevention officer. In 2006, Perry was promoted to sergeant, responsible for patrol supervision. 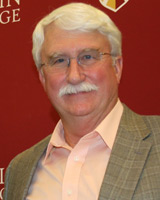 Caylor served in the U.S. Navy and was employed at Kaiser Aluminum in Sherman before becoming an officer in the Austin College force in June 1975. He was promoted to sergeant after a few years and, in January 1998, was named chief. His retirement became official as of July. Throughout the spring term, several recognitions were made of Caylor’s service, including a special citation from the Student Assembly on behalf of the student community.

“I certainly enjoyed my tenure with Austin College,” Caylor said. “I’ve seen great strides in improving the College and the Campus Police,” he said, mentioning the card access building entry, implementation of an emergency alert program, installation of the campus siren system, new radios, and new transportation for the campus police.

In his retirement, Larry and his wife, Pat, continue to operate a working ranch in Fannin County