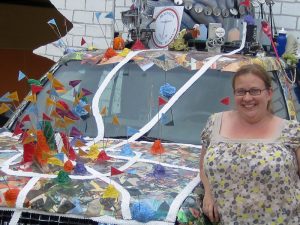 Last year at this time, Kristy Peet ’02 was working on her car. No, she’s not a mechanic; she’s an artist. And the car was the art.

Kristy was one of the artists preparing a car for the 2011 Houston Art Car Parade—one that looked like it had crashed its way through the gift shops and collections of the 100+ museums in Houston.

The car was headed for the American Association of Museums Annual Meeting and Museum Expo in Houston. After the parade, the car was on display at MuseumExpo Hall at George R. Brown Convention Center. The car was the brainchild of the former director of the Museum of Fine Arts in Houston, who had died the year before. He hoped to create a car for the parade that showed the diversity of Houston museums—by driving right through them all.

The car’s crew, a team of artists at Skydive art collective including Kristy, put out a call to area museums to send materials for the project—and ended up with posters, maps, reports, T-shirts, and memorabilia of nearly every sort from around the region.

The Health Museum sent a brain; the Maritime Museum a miniature colonial ship. Materials collected, it was up to the artists to create the moving museum.

The photos below show something of the process and only a little of the fun. 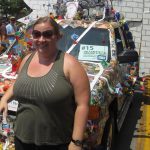 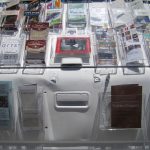 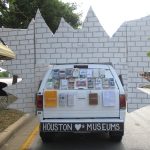 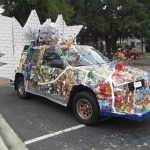 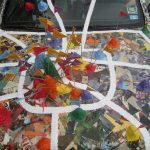 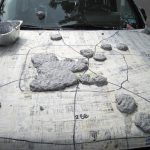 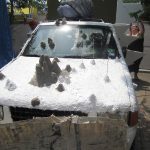 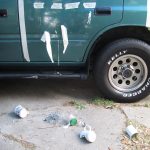 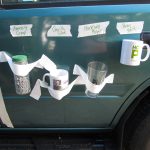 When she’s not creating art cars crashing through the city, Kristy lives and works in Houston as an artist. Her large format photographic work deals with psychological issues and has been shown in solo and group exhibitions across the country, including a solo exhibition at Dallas Contemporary. She also teaches photography at College of the Mainland in Texas City, and is a resident artist at Box 13 Artspace.