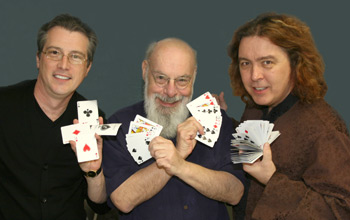 Magic was in the air on campus when two of the world’s most famous and influential magicians performed before a capacity crowd in Ida Green Theatre in February for “Magic: The Secret Art.” The Las Vegas-style show featured internationally acclaimed magicians Jeff McBride and Eugene Burger, along with Austin College professor Lawrence Hass.

The performance was part of the Austin College Theory and Art of Magic series, which Hass coordinates through the Department of Communication Studies.

The artists performed a much different show the next evening at the Park City Club in Dallas. This unique fundraising event combined a Valentine’s Day banquet, up-close magic and sleight of hand presentations, and scholarship support for fine arts students at Austin College.

Jeff McBride of Las Vegas combines mask, martial arts, kabuki theatre, world-class sleight of hand, myths and stories from around the world, and more, to create electrifying performances that thrill a wide range of audiences.

Eugene Burger of Chicago has been named among the “Most Influential Magicians of the 20th Century” by MAGIC Magazine for his deeply astonishing magic and for his reputation as the world’s foremost teacher and philosopher of magic. Burger appeared at Austin College in two sold-out shows in February 2010, and he is back to create his special magic with his friend and colleague Jeff McBride.

Dr. Lawrence Hass is founding director of the Theory and Art of Magic program. He is a professor of humanities at Austin College, teaching courses in philosophy and in the history, theory, and performance of magic. While unusual for a professor, the focus in magic is rooted in the fact that he also is an internationally recognized magician, teacher of magicians, and speaker about the meaning and importance of the magical arts. He has performed his style of magic from coast to coast at such prestigious venues as the world-famous Magic Castle in Hollywood, Magic Chicago, and the Wynn Casino in Las Vegas.