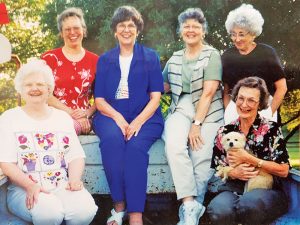 Peggy McCoy Faulk ’56, Gail Schmid Smith ’55, Pat Broyles Gohlke ’56, Carolyn Smith Chapman ’57, Irene Ortega Bullard ’56, and Virginia Brown Bonar ’57, as pictured left to right, think fondly of the days between 1952 and 1955 when they were roommates and suitemates at Austin College. After graduation and some 38 years of busy living, they reunited and gathered every six months at one another’s homes, from West Texas to Mississippi. Sometimes husbands joined them, sometimes not. Occasionally one of the women missed a meeting, but the group always had a good visit. The last few years, the women have found the driving too much for them so have established a letter they pass along, one to another, to remain connected. The bonds of friendship won’t be broken! 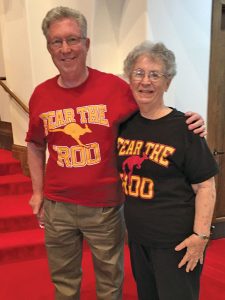 Nancy Scott ’59 and Richard Johnson ’67 met up last year at First Presbyterian Church in Kerrville, Texas, each wearing one of their favorite Austin College T-shirts. 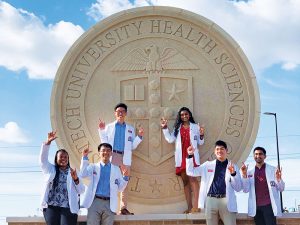