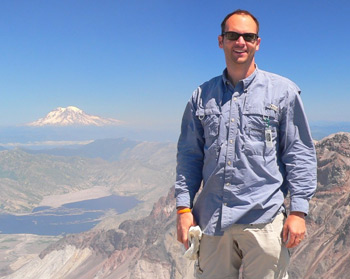 Baker Goes “Extreme” at the Smithsonian, Wins the “Oscar”

Mention of “the most extreme places in the universe” isn’t an everyday conversation starter. This spring, however, David Baker, Austin College Physics Department chair, has opened with it pretty often.

The 50 Most Extreme Places in Our Solar System is his award-winning book, published in September 2010 and written with his colleague Todd Ratcliff, planetary geophysicist at NASA’s Jet Propulsion Laboratory.

Since September, he has spoken to groups at schools, community events, special interest meetings, and book signings, and been interviewed on television and radio programs about the book.

Baker’s spring has been busy with book signings and presentations too, highlighted by an April 3 signing at the Smithsonian National Air and Space Museum in Washington, D.C.

Later this month, Baker will lead Master Naturalist Certification participants on a journey of “Extreme Weather and Climate in Texas” during an interactive training session in McKinney, Texas. He also will be the featured speaker for the April 30 Barnes and Noble Astronomy Book Fair in Plano, Texas. The fundraising effort will benefit 3 Rivers Foundation, a non-profit astronomy outreach program.

Written for readers of diverse age and knowledge, The 50 Most Extreme Places in Our Solar System (Harvard University Press) explores extreme regions on Earth and beyond—giant turbulent storms, explosive volcanoes, and the possibility of life surviving in harsh conditions.

Illustrated with explanatory figures and stunning NASA photographs, the book fuses the human fascination with extreme natural events and the allure of outer space by reporting new scientific discoveries in a fresh and often quirky way.

In February 2011, the Association of American Publishers awarded the book an Honorable Mention for Professional and Scholarly Excellence (PROSE) awards in the category of cosmology and astronomy.

The PROSE Awards annually recognize the very best in professional and scholarly publishing by bringing attention to distinguished books, journals, and electronic content in over 40 categories. Judged by peer publishers, librarians, and medical professionals since 1976, the PROSE Awards are extraordinary for their breadth and depth.

Baker said the PROSE Awards are the professional and scholarly publishing field’s equivalent of the Academy Awards. And that’s not just “extreme” talk …