Though service really is its own reward, Austin College members of Alpha Phi Omega (APO) national service fraternity have received an award for service programming Members of APO have been volunteering at Austin College and the local community since 1970 when the Phi Xi chapter, made up of both male and female members, was established on campus. 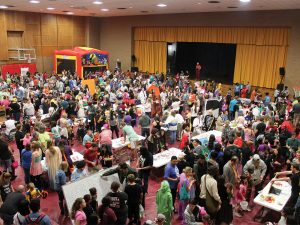 Members perform some 6,000 hours of service annually throughout Grayson County.

Their spirit of service was recognized in fall 2015 when the Phi Xi chapter received the Chapter of Excellence Award—Gold Level. And, this spring the group received a Youth Service Grant from the national organization that will allow them to add another project to their annual program.

The national Chapter of Excellence Award recognizes outstanding work in demonstrating the pillars of leadership, friendship, and service. Gold Level recognition indicates the group has gone above and beyond the requirements for the award, said Ganesh Maniam ’17, Austin College chapter president. He added that the awards committee called the chapter exemplary of what it means to be a service fraternity. 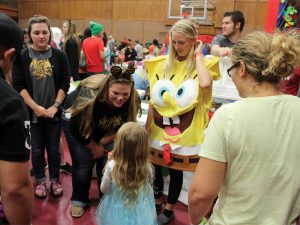 ’Roo Boo particularly was recognized by the awards committee as an outstanding contribution to the Sherman community. For 16 years, APO has organized and hosted ’Roo Boo as a free trick-or-treat alternative on campus each Halloween, inviting neighborhood children 12 and under, accompanied by parents, to take part in a variety of games and activities. In 2015, more than 1,300 people attended the event made possible by 250 campus volunteers representing 51 campus organizations. Karisma Sheth ’17 was the 2015 coordinator.

The chapter also provides service at several events within the local community from the Boy Scouts “Scouting for Food” event to the annual “Boot Scootin’ Ball” fundraiser for a community’s volunteer emergency services program. Members also take part in campus-wide projects like the Service Station’s Great Day of Service, JanServe, and GreenServe.

The recent grant will allow the fraternity to host ’Roo Bash, a new spring outreach for children in need.

The Austin College Phi Xi chapter, founded in February 1970, has some 80 members, who are represented in nearly every organization on campus. The group also provides regular leadership development for its members.