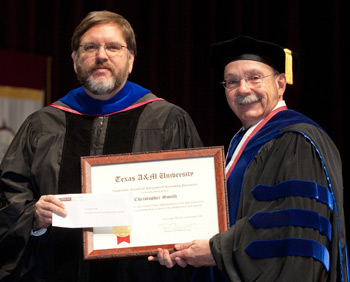 Chris Smith ’84 received the Texas A&M Inspiration Award in December 2010—an unusual award based on extraordinary inspiration. Sponsored by the Office of the President, the purpose of the award is to recognize Texas high school teachers who have inspired Texas A&M graduates at the high school level, challenging them while preparing them to excel at the collegiate level and beyond.

Smith, a world history teacher at S&S Consolidated High School in Sadler, Texas, was nominated for the award by former student Philip Murtaugh. Smith was recognized during commencement ceremonies at the university in December, receiving a certificate and check for $2,000, as well as a $1,000 check for his high school.

He also had another privilege—formally presenting Murtaugh’s bachelor’s degree to him during the commencement ceremony—an act normally reserved for the university president.

Murtaugh said his high school graduating class had 52 people in it, and that because of the small, rural area, many teachers stay only a short time before moving on to larger schools. “Chris Smith, however, is one of those teachers who stands out above the rest,” Murtaugh said. “He has stayed at the school through good times and bad, dedicated his nights and weekends to University Interscholastic League (UIL) events, pushed his students to succeed, and above all, he cared.”

The senior-level world history course taught by Smith is known and feared throughout the high school because he challenges his students, Murtaugh added.

“I ask that you please consider Chris Smith because the impact he makes is truly remarkable,” Murtaugh said in his nominating letter. “The man is the epitome of teaching excellence. I am forever grateful for the impact he’s had on my life.”