Saying Thanks to a Leader 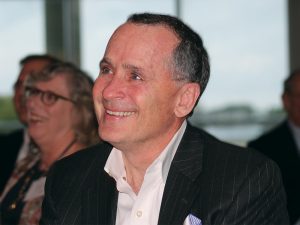 When President Marjorie Hass welcomes guests to an event she affectionately has dubbed “Todd-A-Palooza,” smiles—lots of them—are in store. Todd Williams ’82 ended his service as chair of the Austin College Board of Trustees at the close of the November 2015 meeting, so an evening of recognition was in order; thus, Todd- A-Palooza. Smiles definitely were in abundance—as were laughter and tears, gratitude and appreciation, and even a bit of lighthearted ribbing. (Todd passed the chairmanship to David Corrigan ’81 but remains an active member of the Board of Trustees.)

Though comments about Todd’s leadership and the Williams’ generosity included heartfelt tribute, the night’s most poignant words perhaps came from Todd and his family. His young sons “stole the show” with extemporaneous comments about their dad and the role model he is to them. Todd’s wife, Abby, spoke about what she has seen of Todd’s heart in his dedication to Austin College. Then Todd was invited to the podium.

He recalled his own humble beginnings, when his parents told him he would attend college but he would have to figure out how to pay for it. “I benefited from high expectations, but also from the fact that I had to figure it out,” he said. “Austin College helped me figure it out in a huge, huge way.”

For the young people in the audience, he offered advice: “Never, ever, ever underestimate the power of an adult who believes in you; who has plans for you, doors they want to open to you that you didn’t even know were there.” He said that Daniel Nuckols, now the College’s John T. Jones Chair of Economics, encouraged him when he was a student at Austin College to consider graduate school at Wharton or Harvard. Todd said his first response, as a young man from a simple background, was “What’s a Wharton?” And then, a few years later, he walked in the front door of the prestigious school and completed an MBA there. He spoke of other Austin College faculty—Ken Street, Light Cummins, “Fast Eddie” Phillips—who also touched his life and encouraged him. 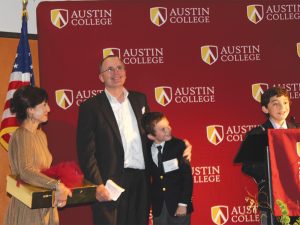 Interestingly, the man stepping down as chair of the Board of Trustees had little connection to Austin College for nearly 20 years after his graduation in 1982. Then, in 1999, Todd heard that his Austin College basketball coach, Bob Mason ’52, was sick. Friends contacted him about helping fund a presidential scholarship in Bob’s honor, which they quickly completed “because a lot of people loved Bob Mason just like I did.”

Bob died just a few months later, and Todd attended the service where he was overwhelmed to see that this man who never made large amounts of money or had worldly success had so many people at his funeral they couldn’t fit in the church. He listened as person after person spoke of Bob’s influence in their lives, each matching Todd’s own feelings. “I view funerals in some way like life’s final report card; and he had an amazing report card. … I walked out of the church and asked myself ‘what am I doing with my life?’ I was 40 years old and had just made partner at Goldman Sachs. I had success. I had achieved the pinnacle of what I thought I wanted—to get myself out of those east Dallas circumstances. But that day, I said, ‘I am nowhere near where I need to be.’”

Part of Todd’s response to that epiphany was to become involved with the Austin College Board of Trustees. “People inspired me; people told me about things they needed, and I tried to see if I figure out how I could help in some way,” he said. “A man who so inspired me when I was 18 to 22 years old inspired me again in a much more powerful way at the age of 40, and he was no longer on this earth.”

Todd offered more encouragement: “Every student in here, please never forget this college; remember the difference Austin College makes in you. In your own way, find a way to give back to the College just like everyone in this room has given back. You will be immeasurably better for it.”

“Everyone else, please never underestimate the circle of your influence. We have a challenge before us in education; it starts in Pre-K and goes all the way through higher education. As you go to your own communities, I urge you to get involved, get engaged in the work of making quality education available.”