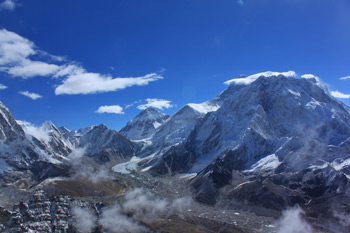 Austin College classmates Mike Davis and John Clark, both ’83, had quite an adventure earlier this year—a trip to Nepal and a trek up Mt Everest. John, who lives in Evergreen, Colorado, and Mike, living in San Diego, met in Los Angeles on April 22 to begin their trip. They flew from Los Angeles to Hong Kong and on to Kathmandu, Nepal, then to Lukla to begin the trek up the mountain, taking on Lobuche East, a 6000- meter peak just east of the Khumbu Glacier.

The two returned to Los Angeles on May 19—and had amazing experiences in the weeks away. Their stories in their own words: 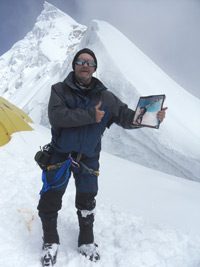 During the trek up to Everest Base Camp, we stayed in tea house/lodges along the way. However, during the glacier training and the climb of Lobuche, we were in tents for seven days. We spent a total of two weeks above 15,000 feet and had some sort of snow or ice for 12 days straight. I have to say, although I have more climbing experience than John, he certainly outdid me on the trek in general and the climb of Lobuche in particular. He excelled at the high altitude and was much more at home on the snow and ice. He beat the rest of us to the summit by about an hour and was a superstar in my book!

I had a copy of Parachutist, the monthly publication of the United States Parachute Association. Bill Leonard ’82 and I have been jumping for some 10 years now. Each month there is a section in the magazine called “Parachutists From Around the World.” People send in pictures from faraway places and they put them in the magazine. I toted that magazine half way around the world to get that shot! It was well worth it!! The contrast of the guy skydiving over the clear blue ocean and the snowy peak in the background is wonderful!

There is so much to be said about Nepal and the Himalaya. The culture and the people were fascinating and wonderful. The terrain and scenery was beautiful and amazing. The mountains there make the Sierras and the Rockies look like not so much! Truly a trip of a lifetime and I must give credit to John for motivating me to make the effort and the journey and to take the time off from work and spend the money to make it happen. I will be buying him beer for many years to come! We arrived back in LAX on the May 19. 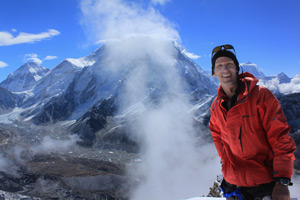 I had been dreaming about a trekking adventure to Nepal for a few years, and when Mike committed to join me last year we started making definite plans, a perfect 50th birthday present to ourselves! I sum up the adventure as 22 days on the trail, 100 miles of trekking, 12 days above 15,000 feet, seven nights in a tent, made the summit of 20,000-foot peak Lobuche East (13 miles south of Everest), made it to Everest Base Camp and Kala Patthar (the end of the trekking trail) for a great view of the sunrise over Mount Everest. The people, sights, sounds, smells, and experiences will last in my memory for a life time. 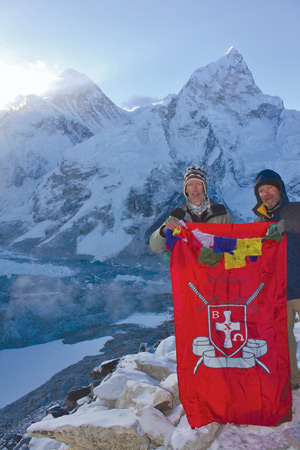 I have always enjoyed the outdoors—skiing, fishing, hunting and just about anything that keeps me there. Mike and I have been backpacking with our sons for the last 10 or more years throughout Colorado and the west. We climbed The Grand Teton a few years ago with two of our sons and have summited a number of the 14,000-foot peaks in Colorado, among other trips. Living in Colorado has allowed my wife and I to raise our family in a great environment, and both our sons share the love of the mountains and outdoors.