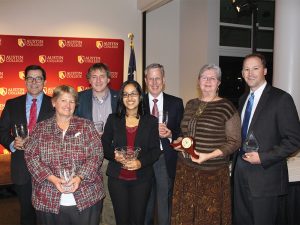 Austin College honored four graduates with Distinguished Alumni honors during Homecoming 2015. The awards recognize those who have distinguished themselves in their professions and in their communities, exemplifying leadership and ethical standards in their interactions. Honorees model the accomplishment, spirit of service and broadened perspective fostered by the Austin College experience, and support and advocate on behalf of the College. First Decade Award recipients are selected on the same basis, but for accomplishment within 10 years of graduation. Austin College President Dr. Marjorie Hass and Kirsten Brandt James ’95, Austin College Alumni Board president, presented the awards.

A. Dale Eichenberger ’68 earned a master’s degree in physics at Purdue University before beginning a long career as a system engineer with Texas Instruments and Raytheon. In 1997, his branch of TI was sold to Raytheon, where he was promoted to the elite Engineering Fellow position in 2002. He retired from Raytheon in 2011 following 39 years of service.

Alex (Faulkner) Lazar ’90 completed a Ph.D./M.D. program at UT Southwestern Graduate School/ Medical Center and residences and fellowships through the Harvard Dermatopathology Fellowship Program. Since 2005, he has served as director of the Department of Pathology for the Soft Tissue Fellowship Training Program and as associate professor in the Department of Pathology at The University of Texas MD Anderson Cancer Center.

Sue Masica ’83 earned a Master of Public Affairs degree at The University of Texas LBJ School of Public Affairs in 1985 before embarking on a lifelong career in government service. Initially a budget analyst at the Department of the Interior, she spent 10 years on the staff of the Senate Appropriations Committee. She joined the National Park Service in 1998 and has served in various executive positions in headquarters and in field leadership positions in Alaska and now in the Intermountain Region.

Dhriti Pandya Stocks ’09 served as an AmeriCorps member for the Youth Volunteer Corps of North Texas, a program of the Volunteer Center of North Texas, and then was hired by the Volunteer Center. She later worked at Junior Achievement of Dallas, and since November 2014, has served as senior development writer for Children’s Medical Center Foundation. She earned a Master of Public Affairs degree at the University of Texas at Dallas in December 2015.

Tom Garrison ’96 (MAT ’98) is principal at Jesuit College Preparatory School in Dallas. He has been an active advocate for Austin College at his own school, bringing students to various special lectures on campus. In addition, he speaks to the Austin College incoming freshman class and their parents each spring about how to make the most of their upcoming freshman year and the transition involved. The award honors the late Heywood C. Clemons, longtime Austin College Board of Trustees chair, and the spirit of dedication and service that marked his leadership.

Carol Daeley, a member of the College’s English faculty from 1973 until her retirement in May 2015, was recognized for her continued involvement and service with alumni. She now lives in Santa Rosa, California. The award is named for Cindy Bean ’75, who worked in the College’s alumni office for many years.