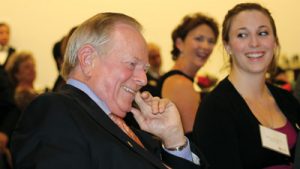 Robert M. Johnson ’53 ended his tenure as chair of the Austin College Board of Trustees this fall so the October board meeting included a special celebration of his contributions in that role, as well as the commitment, dedication, and support that he and his wife, Joyce, long have demonstrated on behalf of the College.

Named a Distinguished Alumnus of Austin College in 1987, Bob joined the Board of Trustees in 1993 and had significant roles in the planning and celebration of the College’s Sesquicentennial in 1999.He also served as chair of the successful New Era Campaign that raised more than $120 million for College facilities and programs. That campaign included a $10 million gift from the Johnsons that supported several campus initiatives. Bob served as vice chair of the board from 1998 until he took on the chairman’s role in 2007.

The October evening of celebration included comments on behalf of faculty, Board of Trustee and Senior Board of Trustee members, Student Assembly, and the Sallie Majors Religious Life Intern Program created by the Johnsons. There were also video tributes and photographs that highlighted the Johnsons’ involvement with the College. Members of the Johnsons’ extended family came to be part of the evening that even included special entertainment by renowned magician Larry Hass, since Bob is a big fan of magic. 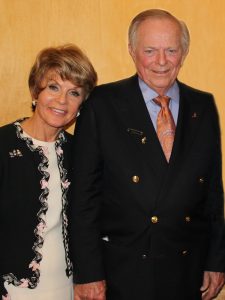 The Johnsons live in McLean, Virginia. Bob, president of The Johnson Group, is a producer and director with nearly 40 years of experience in broadcasting, event production, and communications, including many award-winning projects like the moving film Paper Clips, documenting a middle school’s efforts to conceptualize the loss of lives in the Holocaust; Bob is always seen with a large paper clip on his lapel in remembrance. Joyce served many years in a successful career as a senior employee with American Airlines.

“I am thankful for what we have been able to do for Austin College, especially for the students,” Bob said when he got his turn at the podium.

In addition to the many students the Johnsons have assisted through scholarships, programming, and facilities, a list was prepared by College Chaplain John Williams ’84 showing that the Majors Religious Life Intern Program, which he oversees, has involved 94 graduates between 2000 and 2012, with 42 who began church-related jobs after graduation; 21 who attended seminary; 14 who are ordained Presbyterian ministers around the country; 20 who are in education; and nine who served as Presbyterian Church (U.S.A.) Young Adult Volunteers.

Obviously, the impact of the Johnsons’ gifts extend far beyond campus and will touch lives far into the future—and create a very fitting legacy.