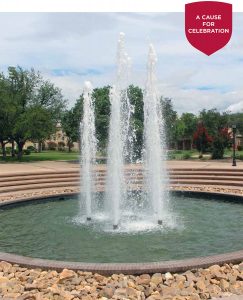 Hundreds of Austin College students have celebrated significant events of their college years with a “dip” in Margaret Jonsson Fountain at the west end of Windsor Mall. That dip usually came at the hands of other students, who happily tossed the celebrant into the fountain’s pool. For the last year or so, however, those celebrations didn’t happen as general deterioration left the fountain nonfunctional.

All that changed in May 2017 as the fountain came to new life at approximately 9:30 p.m. on the renovation project’s completion deadline, only a few days before Commencement.

The circular, amphitheatre-style fountain and surrounding plaza (including a second fountain outside Ida Green Communication Center) were a gift in 1972 from Margaret and Erik Jonsson, a trustee of the College who was a former Dallas mayor and a founder of Texas Instruments. The board named the Margaret Jonsson Plaza and Fountains in honor of Margaret’s development of beautification projects in Dallas and North Texas. She believed that optimum conditions for learning include a pleasant environment, excellent facilities, and a creative academic program.

The fountains and plaza certainly provided a pleasant environment for many students over the intervening decades, particularly those who claimed a sunny spot around the popular fountain’s decorative brick tiers encircling the 50-foot diameter of the pool. 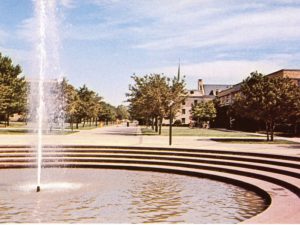 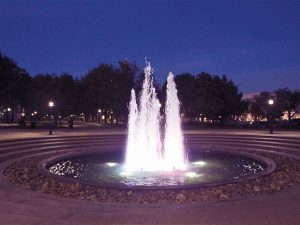 The new project maintained the amphitheatre design, with the brick tiers unchanged. The pool now is 8 feet smaller due to a circle of rocks that covers a drain system and keeps debris from the water. The fountain project again was completed thanks to the Jonssons. The board of the Margaret Jonsson Family Foundation agreed to match up to $60,000 for modernization of the fountain if the College raised an equal amount—which was accomplished this spring before the work began.

David Turk, executive director of facilities for the College, said the updated fountain itself is state of the art, with minicomputers running the fountain’s spray and multi-changing light system. Talley Associates landscape designers of Dallas completed conceptual work for the project; the fountain and lighting were designed by Roman Fountains in Georgia; and general contractor was All Pro Pools and Landscape of Denison, Texas. Turk said the team members compressed the work of several months into only a few to meet the assigned deadline, with completion a tribute to their dedication.

When the team flipped the switch at end of day on May 11, anxious moments passed as the pumps and lights turned on but no nozzles were spraying. Several adjustments later, streams of water were shooting skyward and cascading into the pool. Though the campus had seemed deserted with only one day of finals remaining, Turk said when the water began flowing, groups of students began to gather excitedly at the fountain’s edge and could be seen lining the IDEA Center windows overlooking the plaza. … A pleasant environment is restored. … And it won’t be long until student celebrations again include a dip in its waters.

Next: The Search for Austin College’s 16th President