The A Cappella Choir Does France!

From May 20 through June 1, the A Cappella Choir and choral director Wayne Crannell, performed throughout France, traveling to Paris, Lyon, Aix-en-Provence, Bordeaux, Angers, and Chartres.

This summer, I went with the Austin College A Cappella Choir on a summer performance tour throughout France, an experience I will never forget. I was the bass soloist for the Mass songs, and as assistant choir director, I conducted Sergei Rachmaninoff’s Bogoroditse Devo from The Vespers on each concert.

We began the tour with four days in Paris, then traveled clockwise throughout the entire country, ending back in Paris. We had performances and excursions to other such places as Lyon, Bordeaux, Avignon, Aix en Provence, Montélimar, Chartres, and Angers. While in Paris, the highlight performance was at Notre Dame de Paris. That performance was particularly thrilling, because we sang the Kyrie, Sanctus, and Agnus Dei selections from Hans Leo Hassler’s Missa Secunda, and Charles Stanford’s Beati Quorum Via for their mid-day mass.

Leading up to the tour, Dr. Wayne Crannell told me I would be conducting Bogoroditse Devo during that Mass; it was something I was excited about and looking forward to, but I did not know how intimidated I was about to be. We had only one rehearsal at Notre Dame the day before the performance, and I was awestruck stepping into the cathedral for that first time. It was that day when Dr. Crannell told me that I would be conducting my piece as the prelude for the entire Mass. I was stunned.

Rehearsing in that space was glorious because our sound soars throughout the cathedral and the ringing echo, especially when we stop singing, took about five seconds to stop. Sunday morning came, and we headed back to Notre Dame and were led through a side entrance and down into the basement to warm up. The room we were taken into was just large enough for everyone to get in with some space to move around.

As we started singing, our voices filled the room and overwhelmed me. I could not believe that we were in France, starting this journey of performances, and about to process into a cathedral that has been there since the 13th century. I stood up to warm the choir on my piece and we started singing. I have not learned how to hold a folder in one hand, conduct with the other, and turn the pages with a third, so I looked silly. Matt Giddings hopped up, took my folder from me, and held it up for me to read while kneeling down in front of me. I could not help but laugh.

Despite the many experiences we got to have on that choir tour, that day was my golden memory, and I will never forget it. We sat in the choir loft waiting for organist to give me the cue to begin the Mass. After I got it, the choir rose, and off we went. I smiled throughout the entire piece while nearly chuckling from giddiness, and that feeling lasted for the rest of the day. I loved the experiences and memories I gained from the choir tour and look forward to the future opportunities on alumni choir tours.

Nick graduated in 2011 and is on track complete his Master of Arts in Teaching through the Austin Teacher Program in May 2012. He plans to direct junior high or high school choir.

As a graduate student, Nick is in his fifth year with the A Cappella Choir and the Quartette. He had been in Consort but had to step down because of scheduling conflicts upcoming with student teaching. Nick is a three-year member of the Choir Council, which is the student governing body of the A Cappella Choir, now serving as president. He has been assistant director since his junior year. “The privilege of being assistant director is that I get to conduct a piece each year and it is performed on choir concerts and tours,” he said. “I conducted for each spring concert and the last two choir tours to Corpus Christi and France. It helped give me a confidence in my conducting and skills, and a trust with my choir.”

Nick also took part in a January Term course, “Castles, Crosses, Kilts, and Celts” in Scotland as a junior, prompting a running joke that “Scotland was not built with Nick Timmerman in mind.”—The castle doors, stairs, and Celtic burial mounds were too small for the 6’3” young man! 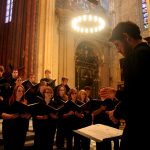 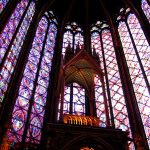 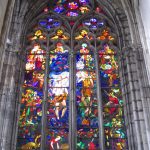 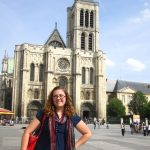 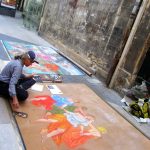 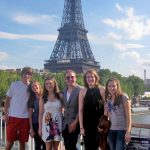 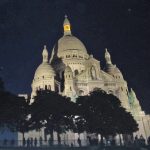 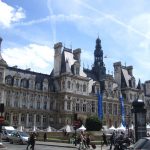 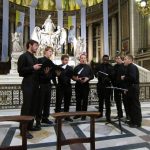 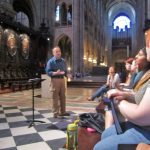 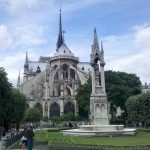 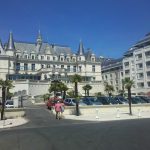 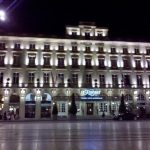 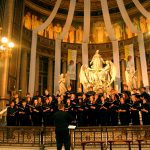