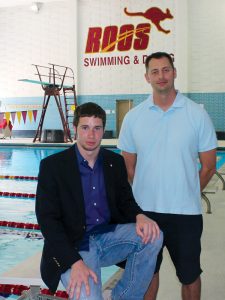 At the 2012 Southern Collegiate Athletic Conference Swimming and Diving Championship Meet, 36 swimmers participated in the 500-yard freestyle event. Finishing 27th, with a time of 5:24.43, was Austin College junior Jeff Munn. That finish did not earn him a spot in the final heat, but was memorable for several reasons. First, it was his best time of the season. The second, much more incredible reason: just a few months before, in October 2011, Munn very nearly died on the deck of the pool in Austin College’s Hannah Natatorium.

Munn has been swimming since he was 10 years old. He learned many years ago that he was born with a heart defect called a ventricular aortic heart murmur, which doctors told him could become fatal under the stress and rigors of competitive sports. Swimming, they told him, would offer the least risk, and he’s been in the pool ever since.

For the past three seasons, Jeff has been a key member of the Austin College swimming and diving team, but this year his career—and his life—very nearly came to an abrupt and untimely end when, during a mock swim meet, he began to experience an irregular heartbeat that he later reported he could both feel and hear in his head while swimming the 500-yard freestyle.

“After 400 yards, I don’t remember past that point,” said Munn. He finished his race in first place, and climbed out of the pool before collapsing on the deck. Initially, he said, his teammates believed he was just exhausted from his swim.

What they soon realized was that he was suffering cardiac arrest. Once they realized the seriousness of the situation, his teammates and head swimming coach Brian Wright sprang into action, with assistant coach Bob Filander racing for the Automated External Defibrillator (AED) while Wright and Munn’s teammate Sean Ryan’15 performed CPR.

Their quick action, along with the aid of other members of the team, saved Munn’s life.

“He couldn’t have asked for a better group of people to be around at the time,” said Wright, referring to the fact that many members of the swimming and diving team have worked as life guards and are Red Cross-certified in CPR and use of an AED. “I couldn’t be more proud of them,” Wright said.” It speaks a lot about them as individuals.”

Munn recognizes how fortunate he was to be around such a strong group of people, and is grateful both for what they did for him and in learning how much the incident affected them. His comeback also served to strengthen the team, despite concerns that Munn could experience another incident.

In order to prevent that very thing from happening, doctors have given Munn an implantable cardioverter-defibrillator, which will shock him back to a regular heartbeat. Munn admits that he is somewhat worried that another attack could happen in the future, but with the ICD and proper medication, he is confident enough to continue and finish his career next season with hopes of breaking the Austin College record in the 500 freestyle.

None of this surprises his coach, of course. “It shows he is a dedicated individual,” said Wright. “He always believes he’s capable of more.”

Next season, thanks to the life-saving actions of his teammates, he hopes to prove exactly that.