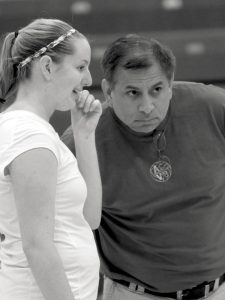 The Austin College volleyball team’s victory over Centenary College at the Southern Collegiate Athletic Conference Divisional tournament in San Antonio on October 21was a historic one—the 500th career coaching victory for Ed Garza, who took over the coaching duties for the ’Roos in 1996.

He has guided Austin College to five appearances in the NCAA Division III National Championship Tournament, while bringing his collegiate coaching record to 500-176.

Garza began the 2012 season as the 20th “winningest” active coach and 32nd in all-time wins at the NCAA Division III level. He was a seven-time Coach of the Year in the American Southwest Conference and in 2007, was named Coach of the year in the SCAC.

A graduate of Ouachita Baptist University. Garza lettered in track and cross country as a student-athlete.