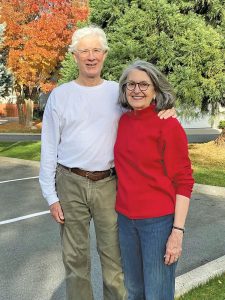 Each became involved in all that Austin College social and academic life offered in those days. Larry played sports and joined Phi Sigma Alpha fraternity. Becky was president of Kappa Gamma Chi and a Phi Sig Sweetheart. One day, Becky noticed a handsome young man playing basketball and decided that he was the one for her. Larry says the feeling was mutual, and the couple dated through Larry’s last two years of college. He went to the Marine Reserves and had gotten out by Becky’s graduation. The Austin College graduates— Larry ’66 and Becky ’67—married in October  1967. 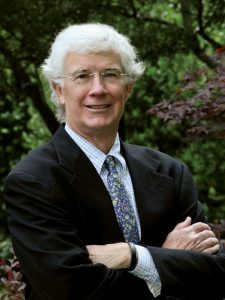 Both Larry and Becky are not only donors but they also have spent many hours giving of their lives. A few years ago they were honored through the Each Moment Matters program, which recognizes individuals in North Texas making an extraordinary difference in the lives of others.

The next years were full ones. Larry first worked at a bank, then moved into Dallas commercial real estate, working as a broker, manager, owner, and developer in industrial real estate for 35  years. Becky taught high school French and Government in Fort Worth, then at Highland Park in Dallas— until pregnancy meant she was no longer eligible to teach. So, she “retired” and raised a family, becoming involved in community volunteer activities. Later, in 1989, she found that her volunteer abilities translated into job skills in the nonprofit sector. 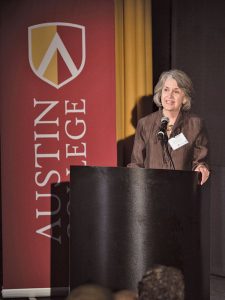 Along with working and raising two sons, Becky and Larry joined First Presbyterian Church of Dallas, which shaped their lives profoundly. The church ministers to homeless and at-risk individuals, and one ministry, The Stewpot, found in Larry a dedicated advocate. Years before cell phones were widely available, Larry recognized the difficulties a person would face regularly by not having a phone number to be reached by doctors, employers, etc. He brought the program “Community Voice Mail” to The Stewpot, raising start-up dollars for it. “People saw the need immediately and understood how important it was,” he says. He later chaired the Community Voice Mail national board. The last five years of Larry’s career were spent as a director of this program at The Stewpot. “Those were the best years,” he said, “It’s never too late to find a calling.”

Larry and Becky have reached a new life stage—retirement—and moved in late September 2021 from their longtime home in Dallas to a new location: Reno, Nevada. (No worries. They still have a small spot in Dallas.) One of their sons and his family lives in Reno; that location also puts them much closer to their other son’s family in Oregon. Of course, it also puts them in beautiful country. Larry loves fly fishing and said he can walk from his house to the beautiful Truckee River in five minutes—in waders.

They have five grandchildren, ages 3 to 12 years, and they are ready for a lot of grandparenting. They surely will find ways to be of service and become involved in their new community, too. They won’t be idle long. 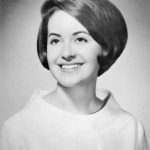 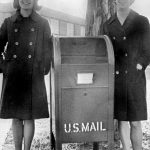 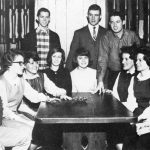 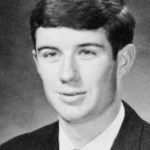 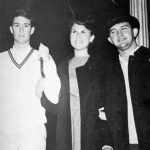 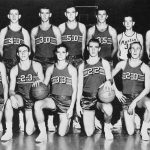 Becky Russell and Larry Sykes had the kind of college years people picture
college to be like. They went to classes with interesting professors; Larry
played basketball and was a member of Phi Sigma Alpha fraternity, for
which Becky was selected a Sweetheart; Becky was a member of Kappa
Gamma Chi sorority and active in other campus organizations. She and a
classmate spent the spring semester of their junior year at the University of
Lausanne in Switzerland. Larry also had time abroad as a student—serving
as a Winant Volunteer in Great Britain.
Photos from Chromascopes 1963 to 1967

One of the couple’s abiding interests from the 1960s until today is Austin College. They’ve both served on the College’s Alumni Board. They have both been named as Distinguished Alumni of the College. Becky currently serves on the College’s Board of Trustees and is completing her last year of full-time service. “It’s gratifying, important work,” she said. In those roles, Becky particularly has learned much about the financial workings of the College. She’s been surprised to learn about the challenges faced by all small liberal arts colleges.

“The middle class has shrunk,” Becky said, “and even if someone is middle class, who can afford $50,000/year to send one student to college? And we know that $50,000 doesn’t really cover the entire cost of education.”

Becky also has learned that Austin College gives substantial scholarships and grants so that no student actually pays $50,000 to attend—but where do those scholarship and grant dollars come from every year, she asks. “Someone has to make the gifts that make those scholarships possible,” she said.

Becky and Larry agree that the realities of today’s students are nothing like when they and their fellow classmates were in school, and they feel many alumni may not be aware of the complexities of the economics and the realities of current students’ lives. Becky elaborated, “I know there are some students who, if their car breaks down over the summer, can’t return to college. It’s not even a matter of if mom or dad loses a job. Just having to get a car fixed could end their education. More than 25% of today’s Austin College freshmen are first-generation students. More than 50% are from minority groups. Those statistics alone do not mean that they have financial struggles, but put a lot of those things together, and many times, we are looking at talented students with deep financial need.”

What to do? Like many alumni, Becky and Larry have made gifts to Austin College—for scholarships, toward building needs, for special programs, on behalf of faculty. Now that they’ve retired, they naturally are thinking about their estate plans and who will benefit upon their deaths. They have set up an estate gift so that the balance of an IRA would go to Austin College once both of them have died.

However, Larry and Becky have also seen the needs of Austin College in recent years—and recognized that all small liberal arts colleges are having the same financial stresses. “We thought that since the school is going to get that money anyway, maybe it is needed more today than it might be needed later,” Becky said. “We decided to accelerate that gift in a sort of ‘Giving While We’re Living’ campaign. We were able to challenge other alumni to match our donation to create sponsored scholarships with part of those dollars. It is thrilling to give something that challenges others to give. The Annual Fund is the lifeblood of the College, and planned/estate gifts are the lifeblood of the future of the College. Austin College has enhanced our lives so much, and giving back has brought us great joy.”