was born in 2001, six weeks early and with a plethora of birth defects. My parents were told that I would not live through the night, but I survived. I was already defying the odds! As I grew, I was able to roll around and pull myself with my arms but my parents knew something wasn’t right. By the time I was 12 months old, my parents had learned that I was missing my shin bones and knees. The doctors gave my parents two choices: live in a wheelchair for the rest of my life or have my legs amputated with the chance that I could use prosthetics.

My parents chose to have my legs amputated at 15 months old. By 18 months old I received my first pair of prosthetics, and after just two days of learning in my prosthetics, I was up and walking, holding the prosthetist’s finger.

From that day forward, my “disability” has never held me back.

When I went to kindergarten, I couldn’t run like the other kids. I told my parents, who said, let’s see if it’s possible. They didn’t know what could be done and went to an orthopedic surgeon to ask. Challenge Athletes and Texas Scottish Rite Hospital for Children got me running legs. They thought I was the youngest to get them. It took three or four months to learn to run. Now, they are fitting 3-year-old kids with running legs. It’s amazing. I have loved swimming since a very young age. My mom had me learn how to swim before I even learned how to walk! In 2004, I watched my first Olympic Games on TV with my parents, and I told my mom, “I want to do that.” My mom then started reaching out to different contacts, including the Challenged Athletes Foundation and U.S. Paralympic Swimming for guidance on how to get me into sports while having a “disability.” 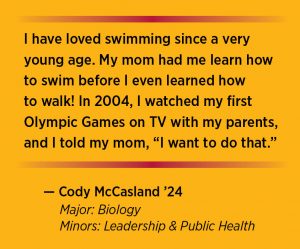 At 5 years old, I joined my first club swim team, Texas River Sharks, where my love for swimming grew. After many years of training and hard work, I attended my first international swim meet in Toronto, Canada, in 2012. It was an amazing experience. After going to this meet, I kept working very hard toward the upcoming Rio 2016 Paralympic Games. I had the honor of competing at trials in Rio, but sadly, because of my young age and where I was in my swimming development, I was not chosen for the team.

I was selected for my first international team for the 2018 International Wheelchair and Amputee Sports Federation Games in Athlone, Ireland. While in Ireland, I won three silver medals for the U.S. in the 100-meter backstroke, 100-meter breaststroke, and 400-meter freestyle. This was an amazing experience and one of my proudest moments. Being on the podium with the national anthem playing was so surreal, and the feeling of the hard work paying off was indescribable. But I knew this was only the beginning for me.

I kept up with my training: swimming six days a week, about 3 miles of practice, and weight training daily. Even through COVID, I continued my training by swimming in my backyard pool and going on bike rides. Do you know how hard it is to swim 3 miles in a backyard swimming pool? But I can’t complain, because many other athletes did not have the luxury of a pool in their backyard. 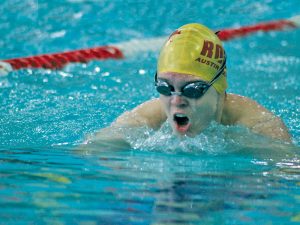 After having a very successful first season at Austin College, I continued my training in Hannah Natatorium, swimming five days a week, 3 to 4 miles each practice, in preparation for the 2021 Paralympic Team Trials. After the College pool closed for renovations in April, I transferred to remote classes so I could finish my preparations for the trials. Sadly, just weeks before the trials, I got the devastating news that I was ineligible for the Paralympic Team because I had not been reclassified since changes in the classification system in 2016. I still attended the trials in summer 2021 in Minneapolis, gaining invaluable experience, cheering on my fellow athletes, and getting to compete on the world stage. (I was able to participate in preliminary rounds even though misclassified, but not the finals.)

Now, I’m in the midst of another year of competition at Austin College and with U.S. Paralympic Swimming teams. I’ve got some world competitions, too. I’m looking out and see a big goal of the Paris Paralympics in 2024. That’s also the year I’ll graduate from Austin College. I’m completing a major in Biology and minors in Leadership and Public Health. I plan to go to medical school and become a Pediatric Anesthesiologist.