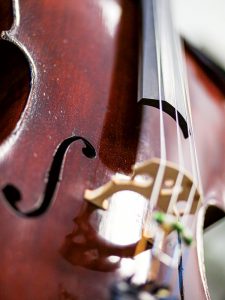 t has been nearly two years since COVID-19 made its indelible mark on the world’s timeline. Among other things, the prospect of welcoming an audience to a concert or special event was replaced by concern for the health and safety of all. As the months passed with delays and cancellations, creative people did what they do best—create anyway.

Austin College concerts, plays, exhibits, tours, and even a couple of marathon improvisation sessions moved to the virtual world of live stream, Facebook, and Zoom. The shift included an investment in technology and equipment, and a learning curve. It was a compromise, yet stories needed to be told in the way that only the arts can tell them. 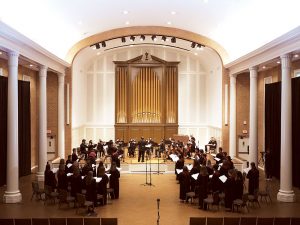 The Austin College A Cappella Choir and Chamber Orchestra arrange themselves at safe distances to perform and record Gloria.

Among the performances produced for the screen is the live recording of Vivaldi’s Gloria in D Major, RV 589, by the Austin College A Cappella Choir and Austin College Chamber Orchestra under the direction of Dr. Ricky Duhaime, the Mildred S. Mosher Professor in Music. Originally intended to be performed for the April 2020 dedication of the newly renovated Clifford J. Grum Sanctuary and Sallie Majors Chapel in Wynne Chapel, the production became a testament to collaboration, creativity, and the importance of the arts in difficult times.

The formal dedication service was to include messages of gratitude and blessing from alumni and guest speakers woven between excerpts of Gloria in D Major, RV 589. The classical music piece by Antonio Vivaldi (1678-1741), a favorite composer of President Steven P. O’Day and First Lady Cece, was written around 1716 in Venice and soars with uplifting music and lyrics of joy and faith.

After Spring Break that year, the dedication service was first delayed then canceled as all students remained remote through the end of the spring term. Although the music had been selected and arranged by Duhaime, student soloists chosen by audition, and rehearsals for both the A Cappella Choir and Chamber Orchestra had begun, the project was set aside, but not forgotten. 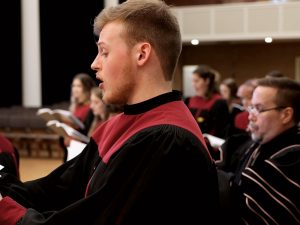 Dr. Wayne Crannell, Associate Professor of Music and Director of the A Cappella Choir, said, “The pandemic would just not go away. At first, we continued rehearsals with no plan for performance. When it became clear there was no way to safely be in the same room singing, even rehearsals had to stop.”

Duhaime said, “Too much time, energy, and effort had already been put in. We thought, ‘We know the students want to do it—so, if nothing else, we will do it as a virtual concert since live concerts are off the table.’ So, it was late fall (2020) when the whole production started to take shape again.”

Crannell and Duhaime agree that it could have been as simple as setting up one camera, a couple of microphones, pressing record, and calling it good. However, the commitment to excellence took hold across campus with “buy-in” from several constituents.

With the passage of time, a few student musicians graduated, and others arrived. Some were able to return to perform as alumni, and all were ready to put in the work no matter how challenging the conditions.

“It was more than just the passage of time; we needed a new edition of the piece,” Duhaime said. “I had to write some things for the orchestra, and there were new students to plan for.”

The choir moved rehearsals to Wynne Chapel where the new chairs were set 8 feet apart for social distancing. “We were learning and getting it done,” Crannell said. “It’s not difficult music, but it is long. That became our main project for Spring Term 2021 because we couldn’t go on tour.” 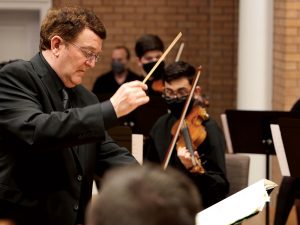 On April 11, 2021, one year after the original canceled dedication, members of the choir and chamber orchestra, four camera operators, a sound technician, and the conductor arranged themselves in Grum Sanctuary. Renovations to the sanctuary, which included the addition of movable seating, made it possible to encircle Duhaime as he conducted the large group seated at safe distances.

No other facility on campus or in the nearby community could provide the space, rich acoustics, and beautiful backdrop for the setting of Gloria. The choir included Crannell, alumna soloist Emily Campbell ’20, music faculty soloist Sylvia Rivers, and 35 students; the orchestra was made up of 12 current students, alumnus Rizwan Jagani ’15 and former ’Roo Jacob Martin, music faculty Cathy Richardson, two guest musicians from the community, and former Austin College First Lady Anna Laura Page on organ. 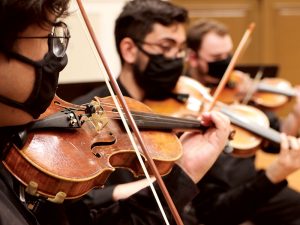 Members of the Chamber Orchestra

Everyone was tested for COVID in advance of the recording days; the orchestra members who could be masked were; and vocalists were given the option to wear a mask. Crannell said that even after months of working together on the music, he had not seen some students’ faces unmasked until the dress rehearsal.

“There was a wide-eyed response once we were together,” he said. “It does sound good!”

“We did the recording in one take and did not stop and start with the exception of a break between movements,” said Duhaime. “There’s no cut and paste, such as pulling the best ‘take’ and splicing together a perfect performance. This is the closest representation of a live performance we could get. We can hear everything that’s good, and yes, we can hear everything we would like another chance at,” he conceded.

Crannell continued, “There was no trickery. In professional productions, there’s a great deal of finessing to make something sound perfect. Although we worked to balance the sound, we did not fake the sound. Nick Hummert was the hero in all of this.” 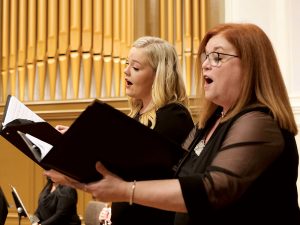 Hummert regularly works with video to produce promotional and informative pieces for the College. The scope of this project was a growth opportunity for him as he planned the shots, worked with Cadence Studios of Sherman to mic the room, and ultimately edited more than 162 gigabytes of footage—while coaching students Preston and Thomas through valuable hands-on experience.

“I feel like this project is the level of quality that you would see on PBS,” said Crannell. “It was a well-conceived plan from the outset. This is an honest, true representation of what we do here with what we’ve got. Except for a couple of community members, everything else is local. Everything is Austin College.”

The live-recorded performance titled “Celebrating Austin College Talents & Gifts” debuted on the Austin College YouTube channel in September 2021 and was highlighted at Homecoming on October 23, with an opportunity to view, listen, and hear from panelists in Grum Sanctuary. It can be enjoyed today as far away as the World Wide Web will allow. 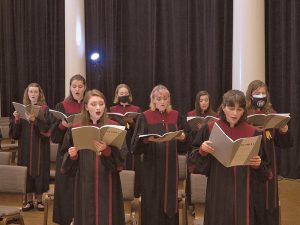 Members of the A Cappella Choir

This broad accessibility of performances such as Gloria makes a good case for streaming and broadcasting all concerts.

Crannell said, “I think it’s easy to say, ‘Let’s just stream everything! We bought lots of equipment, so we better use it!’ The problem with that is we also have a responsibility to give live performances. If we stream everything, we’re giving audiences an excuse … a chance … to sit at home and watch everything remotely.”

“That fundamentally changes everything for our students,” he said. “The experience of live people sitting in front of them is a critical piece of what we do when we educate our musicians.” Both Duhaime and Crannell expressed that the audience has its own role in every performance—to be present, engaged, and responsive. Performers often say the audience provides their motivation.

The motivation to follow through on learning and performing Gloria, RV 589, came from other sources: first to honor the faithful and generous support of Mary K. Grum and the Clifford J. Grum Foundation that made the sanctuary renovations possible, and second—to prevail.

Duhaime recalls a comment from Austin College Chaplain Dr. John Williams ’84 after the Homecoming presentation and panel discussion, saying, “What I really like best out of all of this … the pandemic did not win.”