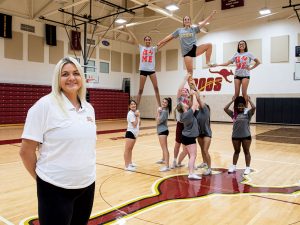 TUNT, the sport, is the fastest-growing female sport in the country. It’s in line for recommendation as an NCAA “emerging sport,” and competition will only grow in coming seasons. Austin College is ready.

In July, Alyssa Freeman arrived on campus as Austin College’s Head Cheer and STUNT Coach to begin to recruit a STUNT team that would be ready to compete in the Spring Term 2023 season. STUNT is an all-female sport, and a team requires a minimum of 16 members. Though Freeman also coaches the cheerleaders and expects to see a new level of achievement in their work, cheer will not become a competition team. She expects there will be crossover between the teams, with cheer team members participating in STUNT.

Coach Freeman says she has some young women in practice now who could compete next spring, several of whom are first-years. They haven’t had prior experience in STUNT as a sport, yet many have some of the necessary skills. STUNT teams perform routines based on skills of tumbling, jumps, tosses, pyramids, group stunts, and team routines.

In STUNT, all teams perform the same routine in a four-quarter competition. Those routines are provided early in the season by the USA Cheer and STUNT organization. Freeman said a lot of memorizing of routines must happen before competition when the teams then show the skills they can execute. When the time comes to take on an opponent, two teams face off in head-to-head competition.

“Not everyone has to be great at everything,” Freeman said. “You may have someone on the team who is just okay at tumbling but who has killer jumps. I love to empower women who feel they don’t have enough skills, to take what they have and build on that. What I really want to see is the work ethic. Bring the work and energy to create a successful practice. I’m excited to see where this
goes.”