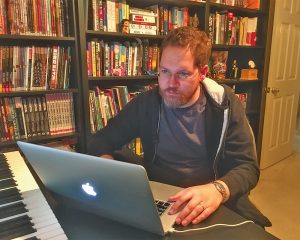 Even if you’ve never met Dave Justus ’98, there’s a decent chance his name is in your phone. You’ll find it just below the words “Written by” on the title screen of the app called Lifeline. The game is a text-based choose-your-own-adventure in which players aid a stranded astronaut named Taylor. It has been downloaded nearly 7 million times since its release, and found its way to the top of many of 2015’s “best app” lists, with no less than TIME Magazine calling it “the best game on the Apple Watch.” 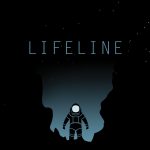 “I just think we hit at the right time, with the right idea,” Dave said of the app, which simulates a text conversation between friends … one of whom is lost on a hostile desert moon. “Honestly, the fact that I wasn’t a gamer—that I hadn’t really played a video game since Tomb Raider II, way back when I lived in Baker Hall—was probably a huge boon.” Lifeline’s Taylor, whose gender is never specified, has become friend, crush, and hero (or heroine) to players who need a voice on the other end of the line even more than they need a quest to complete.

The game’s success has allowed for a whole universe to spring up around Taylor, with Justus penning a direct sequel (Lifeline: Silent Night) as well as an urban fantasy game (Lifeline 2: Bloodline), with more on the way via Big Fish/Three Minute Games. “When I see someone cosplay as a character I created, or someone tweets that they’re on the edge of their seat, waiting to see what happens next … it’s humbling, knowing I’ve made this fantasy world real for them.” 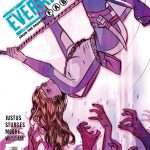 An English major with a concentration in creative writing at Austin College, Dave never missed a trip to the comic book shop in college. Along with his writing partner Matthew Sturges, he currently pens the comics Everafter: From The Pages Of Fables, a sequel to the long-running DC/Vertigo series Fables, as well as Public Relations, a dark comedy that he describes as “It’s Always Sunny In Westeros.”

“There’s nothing writers love more than to be cynical, particularly about their liberal arts education,” he concluded. “But hey, if you struggle for 40 years or so, you, too, can be an overnight success.”