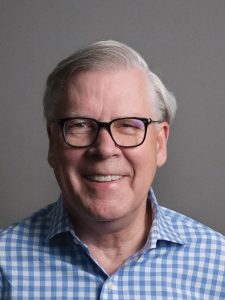 Bill Warren ’74 received the Community Hero Award at the Tech Titans technology industry awards gala in August 2018. Now executive chair and CEO of Reflect, a Dallas-based digital media and advertising company that designs digital signage networks, Bill has had successful careers in a number of industries. For nearly 35 years, he has also been an advocate for children with special needs. When his son was born with special needs, the search for resources led Bill and his wife, Beverly, to what was then Richardson Development Center. Eventually, Bill led a capital campaign to build a new headquarters in Richardson, now aptly named The Warren Center, where 900 children are served each month. He and Beverly have also helped to raise millions of dollars for the center in the years since. “When we were blessed with John, we had so many friends and people we didn’t know help us in the first three or four years of development,” Bill explains. “So now it’s my turn to help others. You really have no idea who you’re reaching. I think it’s good to provide quiet services where people don’t know it’s you. We want to be as humble as we can.”

Bill and Beverly’s son, John, graduated from Austin College in 2007, then earned a master’s degree at St. Edward’s University. He works in game design and production.