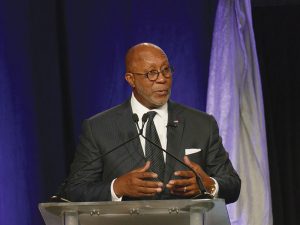 Ron Kirk ’76 received the H. Neil Mallon Award from the Dallas/Fort Worth World Affairs Council in October 2018. “The importance of Ron Kirk’s contributions locally and nationally cannot be overstated,” said Marjorie Adams, board chair of the council. “His dedication to ensuring that Dallas continues to flourish as a world-class city, while expanding its global presence, is just one example of why he embodies the spirit of the Mallon Award.” Kirk was elected to two terms as mayor of Dallas (1995 to 2002) and served as U.S. Trade Representative (2009 to 2013). Outside public office, he has worked as an attorney, now as senior of counsel for Gibson Dunn. “Ron Kirk was an international ambassador for Dallas long before President Barack Obama named him U.S. Trade Representative,” said Dallas mayor Mike Rawlings at the awards event. “He shows the world the very best of Dallas and our region.”