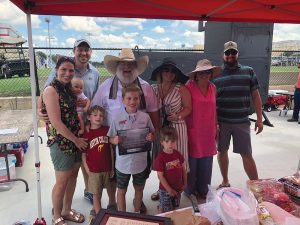 Billy Core ’75 has made lots of new friends in the Larry Kramer Outback of Jerry E. Apple Stadium. He’s cooked up lots and lots of meat at the games pretty much since the Outback was opened—even before it was named for Kramer. Things kicked up a notch this fall with the addition of a giant smoker built by Kirk Lipsitz ’18 at Billy’s request and to his specifications. (Billy knew Kirk’s mom from high school; it’s a small world.) At the first game of the season, Billy received a surprise with the “dedication” of the smoker, naming him the Head Pitmaster of the Outback, complete with cooking tools engraved with his name, a proclamation signed by College President Steven O’Day and read by Danny Buck ’78, and Billy’s entire family on hand to celebrate.