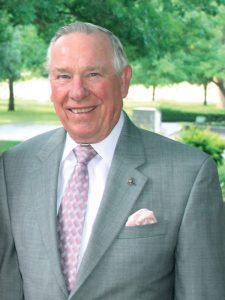 The name of longtime educator Linus Wright ’49 endures in the Dallas educational system. The Dallas ISD board of trustees unanimously approved a measure in June 2018 to rename its new headquarters at 9400 North Central Expressway as the Linus D. Wright Dallas ISD Administration Building. Several educators spoke on behalf of the measure, praising Wright’s lifetime work  centered on improving educational opportunities for students in Dallas, in Texas, and across the nation. He served Texas schools for 40 years as a teacher, principal, and assistant superintendent, with 10 years as Dallas ISD superintendent. He spent two years in Washington, D.C., as Under Secretary of Education, appointed to that Cabinet-level position in October 1987 by President Ronald Reagan. Wright has continued his work on behalf of education throughout his life. Named a Distinguished Alumnus of Austin College in 1988, he served several years on the Austin College Board of Trustees and currently is a senior member of the board.