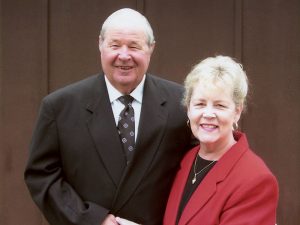 Norman Dickey ’62 was honored by the Howe (Texas) ISD for 50 years of dedication to Howe athletics at its 2018 Community Pep Rally kicking off the fall athletics season. Community members and former coaches and players were on hand to recognize Dickey’s service. He was athletic director and head football coach for the Howe Bulldogs from 1964 to 1975 and still leads all Howe coaches with 51 victories. During 12 seasons, his teams achieved district, bi-district, and regional championships—the highest a Class B school could advance at the time. He retired from coaching in 1975 and continued to work in Howe ISD as principal, interim athletic director, and interim superintendent, retiring in 1996 as assistant superintendent. After retiring, Dickey still could be found working in various aspects of Howe athletics, including maintaining a ranking for Howe teams in each major sport, something he has done for decades. Norman and his wife, Joanne Berglund Dickey ’64, have lived in Howe the entire 53 years of their marriage and raised two children there.