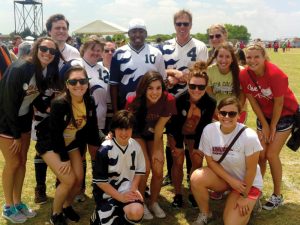 “As athletes themselves, the Kangaroos know someone has to keep score, to shag a ball, to fill water cups—and there has to be a fan in the stands to help change the outcome of the game,” Katy said. “They are able to take their own experiences as athletes and make the experience for our Special Olympics athletes that much better!”

In addition, the Austin College athletes presented a check for $750 to Katy this spring for Special Olympics in a continuation of the partnership. The groups already are planning for next spring’s involvement, which they hope to expand with the Sherman delegation. 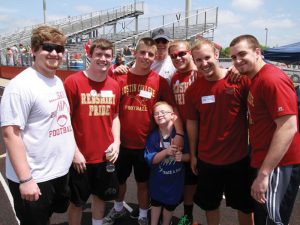 Special Olympics is just one project in which Austin College athletes show their volunteer spirit. For many years, team have raised money to support cancer research, continuing last fall with the women’s soccer team’s Give Cancer the Boot fundraiser. A free basketball clinic for area children offered by the women’s team just before the 2012 holidays benefitted Toys for Tots; and the softball team spent time with residents at Preston Retirement Home during the holiday season. Additionally, teams have been involved in projects at area schools, with the men’s basketball team interacting with students at Fairview Elementary School, and members of the football team involved in a reading program with area elementary students.

These instances are just examples of the spirit of giving and giving back that each of the Austin College sports teams emphasize.