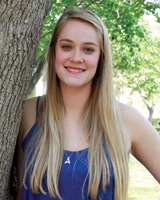 Adrienne, a three-year letter winner and starter in volleyball, was among the national leaders in both total digs and digs-per-set. Her average of 6.14 digs-per-set led the SCAC by a wide margin, and helped her earn two SCAC Player of the Week awards as well as First Team All-SCAC recognition. She also was a SCAC Academic Honor Roll member.

Having graduated with majors in business administration and psychology, Adrienne has returned to Arlington, Texas, to work and “save up for grad school or just life in general.” She said that though her Austin College experiences taught her many things, she remains uncertain about her career direction. She is considering graduate school with the aim of becoming a marriage counselor—or a career in event planning with hopes of one day owning her own business. Adrienne is a member of Psi Chi, national honor society in psychology.

“Continuing to play volleyball in my college career was definitely one of the best decisions I have ever made,” Adrienne said. “It hasn’t been an easy path, but the friends and experiences that I have from volleyball will be with me for the rest of my life. It was wonderful to be able to experience college and play the sport that I love at the same time.” 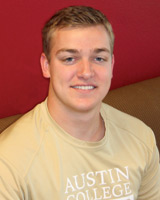 Andrew, a four-year letter winner and starter, was a SCAC All-Sportsmanship Team honoree last fall in addition to being one of the top defenders in the league. Though playing a defensive position, he was third on the team with five goals scored this year for a total of 10 points. He also was a SCAC Academic Honor Roll member throughout his Austin College career.

Having graduated with a major in sociology and a minor in biology, Andrew will take the next year to prepare for and apply to dental school. He hopes to attend the University of Oklahoma College of Dentistry and become an orthodontist. “Being a college athlete meant a lot to me,” Andrew said. “I would not go back and change anything; some of my fondest memories stem from being a member of the Austin College men’s soccer team, and I owe that to great group of teammates/brothers. Being an athlete has influenced my college life by teaching me dedication, commitment, hard work, responsibility, time managements skills, and to give my best effort no matter what.”

The outstanding female athlete award honors the late Gene Day, who was instrumental in beginning the women sports program at Austin College and coached women’s tennis, volleyball, and softball during her tenure on the physical education faculty at Austin College. The first woman inductee into the Austin College Athletic Hall of Honor, she also was a recipient of the College’s Coach Joe Spencer Award for Meritorious Service and Lifetime Achievement in Coaching.

The men’s outstanding athlete award honors the late Pete Cawthon, a legendary figure in Austin College athletics who served as head football and baseball coach from 1923 to 1927, in addition to coaching basketball and track and field. He eventually served as head football coach and athletic director at Texas Tech University, then coach of the NFL’s Brooklyn Dodgers, associate coach for the Detroit Lions, and athletic director at the University of Alabama.

Many of the awards presented at the Athletics Convocation are named for successful Kangaroo players and coaches, honoring individuals. This spring a new honor in football was announced: the Chop Van Pelt Lineman of the Year Award, named for the 1954 alumnus and four-year letter winner on the Kangaroo team. 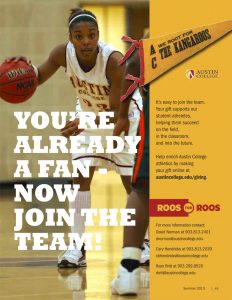 The Southern Collegiate Athletic Conference announcement of its fall and spring Academic Honor Rolls included 117 Austin College scholar-athletes. Athletes who maintain a grade point average of 3.25 or higher in their semester of competition are named to the SCAC Honor Roll. Team representations for 2012-2013: