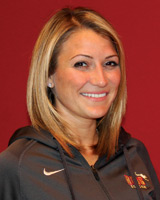 Kristina Corona signed on as head women’s soccer coach at Austin College in March and has been hard at work preparing for the fall season.

She previously served as the head coach at University of Dallas, where she was named Southern Collegiate Athletic Conference (SCAC) Coach of the Year last fall.

“Kristina has tremendous knowledge and experience from her time as an NCAA Division I student-athlete and as a head coach at the NCAA Division III level, as well as an outstanding understanding of the SCAC,” said Austin College athletics director David Norman ’83.

The coach is a 2009 graduate of University of Tulsa, where she was a member of the women’s soccer team. In 2010, she took over the University of Dallas team and in three years at the helm, led the team to a record of 30-26-4, including 12 wins last season.

In addition to coaching at the University of Dallas, Kristina has worked various soccer camps around the nation. She also played for and served as an assistant coach for the Fort Worth Panthers of the Women’s Premiere Soccer League in 2010 and 2011. She has been a member of the National Soccer Coaches Association of America since 2010.