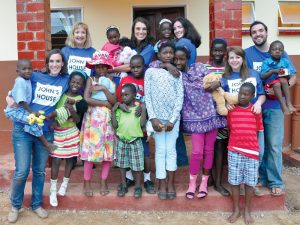 As an Austin College student Evelyn Jacoby Scurry ’65 took part in an Operation Crossroads Africa trip to Liberia in 1964—and she has been  committed to service ever since. She wanted to instill in her children the value of helping others.

She’s been successful. Her daughter, Holly, is vice president of Family Legacy Missions International and the entire family has been involved in ministry at the Tree of Life Children’s Village in Zambia, Africa.

After her husband’s death in 2009, Evelyn and her children raised funds to build a house at the village in his memory. In December 2011, the family spent three weeks in Zambia, preparing for the dedication of “John’s House,” which became home to 14 orphans, aged seven  months to 13 years, and two housemothers.

Read more of Evelyn’s story in the Spring 2012 online magazine. She encourages alumni and friends of all ages to consider a summer volunteer experience at the village.