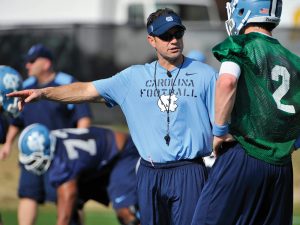 Starting out as a graduate assistant for the Kangaroo football teams seems to set coaches off on quite successful careers. Three alumni who made their mark first on the playing fields then went on to coach from the sidelines for the Austin College football squad have some new assignments for the upcoming season.

Larry Fedora ’85 became the head football coach at the University of North Carolina in December 2011. He had served as a successful head football coach at the University of Southern Mississippi, leading his team to four consecutive bowl games and a Conference USA championship. A former wide receiver at Austin College, Fedora was inducted to the Kangaroo Athletics Hall of Honor in 2006 and was a member of the 1981 NAIA National Championship team that celebrated its 30th anniversary last fall. Before taking the head coaching job at Southern Mississippi, Fedora most notably was the offensive coordinator at both Oklahoma State and Florida. 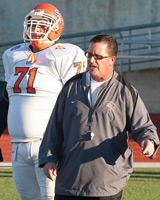 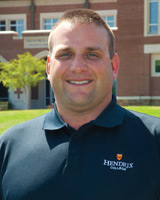 Bart Tatum ’91 has joined Sam Houston State University’s football staff as offensive line coach after serving as Missouri Southern University’s head coach for the past six seasons. While at Missouri Southern, Tatum led the Lions to their first winning season in 11 years. He served several seasons as offensive coordinator at Northwest Missouri State. He was a graduate assistant coach at Austin College, leading the running backs for eight months and the defensive line for one year. As a Kangaroo player, he set the school record for rushing touchdowns.

Justin “Buck” Buchanan ’97 has been named head coach of Hendrix College’s first men’s football team in 52 years. He coached at Louisiana College since 1999 and was one of the original staff members when that school’s football program was reinstated, recently serving as associate head football coach.