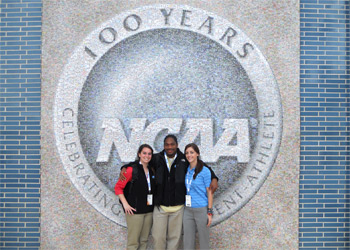 Three Austin College athletes—Emily Brzuzy, Erika Higginbotham, and Deandre Holmes—were among a delegation of 18 Southern Collegiate Athletic Conference (SCAC) players selected to attend the NCAA 2012 convention this January in Indianapolis, Indiana. Student athletes from nine of the 12 SCAC schools attended through an NCAA Division III grant. They took part in activities from education and business sessions to the NCAA Honors Celebration. The three are members of the Austin College Student Athletic Advisory Committee (SAAC).

“I now have connections with many people around the country who I can contact in the future,” said Erika Higginbotham, a senior soccer player from McKinney, Texas. Completing a major in exercise & sports science and psychology, she has been accepted at Texas Tech University for fall 2012 for a master’s program in exercise & sports science with an emphasis in sports management. Those NCAA contacts will come in handy; she hopes to become an athletic administrator or work within a professional sports team. 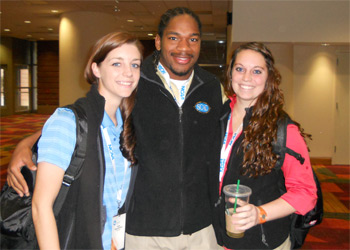 “What I gained from this experience was insight into the business side of Division III sports and how athletics directors and college presidents see the correlation of sports and academics at their schools,” said sophomore Deandre Holmes of Watagua, Texas, who is completing a major in chemistry. A member of the Kangaroo football team and vice president Student Athletic Advisory Committee, he is considering two career options. He will continue his education through the College’s Austin Teacher Program and teach chemistry and coach football at Haltom High School, or pursue a career as a pharmacist.

Senior Emily Brzuzy of Houston, Texas, said the convention expanded her knowledge of the NCAA. “Seeing some of the ‘inside’ of the NCAA and networking with the ‘big dogs’ gave me a lot more respect for the NCAA as a whole. I learned so much more than I ever thought I could about Division III athletics and the NCAA.” Emily was a member of the Austin College soccer team and volunteered with local soccer programs for children. She is completing majors in exercise & sports science and psychology as well as a minor in Spanish. She plans to move to her native state of Indiana after graduation and begin a master’s program in occupational therapy in 2013.