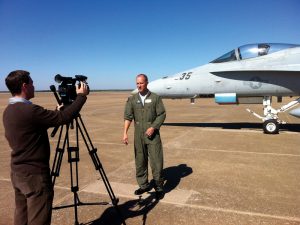 Just as the last strains of the “The Star Spangled Banner” rang out in Apple Stadium before the Homecoming football game, a U.S. Navy F/A-18 jet roared above the crowd. Lieutenant Ross “Jackpot” Jackson ’02 wanted to honor the men and women of the U.S. military as part of the celebration of his 10-year reunion.

Jackson reported to the Black Knights of Strike Fighter Squadron 154 at Naval Air Station Lemoore, California, flying the F/A-18F Super Hornet, in March 2008. During this tour, deployed aboard the USS John C. Stennis and the USS Ronald Reagan, he served as the squadron Air-to-Ground Weapons Training Officer and the head landing signals officer.

In March 2011, Jackson reported to the United States Navy Fighter Weapons School, Top Gun. After graduating from the course, he joined the staff as a Top Gun PGUN instructor pilot and now serves as the U.S. Navy’s Subject Matter Expert for both the AIM-9 Sidewinder and Aerial Gunnery. At Top Gun, he flies the F/A-18 Hornet, F/A-18 Super Hornet, and F-16 Fighting Falcon. During his career, he has accumulated more than 1,100 flight hours and more than 225 carrier arrested landings.

Jackson lives in Fallon, Nevada, with his wife, Rachel, and their sons, Otto and Everett.