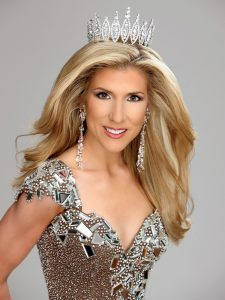 A beautifully dressed woman can create quite a stir entering a room—especially when she’s wearing a sparkling sash and a glittering crown. For Rachel Blacketer Hedstrom ’00, Mrs. Texas 2012, that sash and crown are about opening doors.

Beyond a child’s fascination with becoming Miss America, Rachel didn’t see herself as a “pageant person.” After graduating from Austin College, she worked in Washington, D.C., with Congressman Ralph Hall, then as media relations director at Children’s Medical Center in Dallas, and in 2009, opened her own public relations firm. Volunteering at an American Heart Association event, she met Mrs. Texas International 2010, who was sharing the AHA Go Red message around the state. Seizing an opportunity to get publicity for a program near to her own heart, Rachel asked the woman to mention Honor Flight whenever possible. The response, “Why don’t you do it?” That led to Rachel’s entering the Mrs. Texas pageant—winning—and spending the past several months talking about Honor Flight at every opportunity. 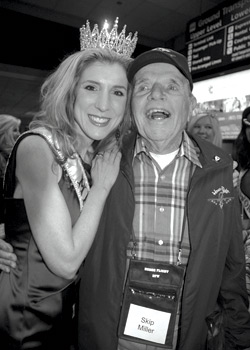 Honor Flight Network is a non-profit organization created to honor America’s veterans by taking them—at no cost—to Washington, D.C., to reflect at their war memorials there. Top priority is given to World War II survivors and other veterans who may be terminally ill. “I went into the pageant for my veterans,” Rachel said. “I had knocked on lots of doors to raise money for Honor Flight. I thought that if I could knock as Mrs. Texas in a crown and sash, maybe the doors would open—and they have. I’ve been able to raise money and awareness for Honor Flight as I’ve traveled the state.”

Rachel became involved with the organization in 2009. A member of a military family, she has great respect for veterans. “They mean the world to me,” she said, adding that her grandfather, an Army Air Corps veteran who was a prisoner of war during World War II, is her inspiration. “Those vets saved the world and came home to mow their lawns for the next 60 years. They didn’t feel special; everyone had gone to war.”

Rachel works with Honor Flight’s DFW hub, serving north Texas, helping to raise $1,000 per veteran to make the two-day trip to Washington, D.C. She has helped with funding for 10 trips, and even accompanied the veterans on one trip. “Standing at the World War II Memorial was very emotional, seeing a field of 4,000 stars that represents the 400,000 Americans who died. For the veterans to see the memorial with other people who understand what they went through in the war is an incredible experience,” Rachel said. “Having the honor to stand at the memorial with 50 veterans—and knowing I had helped to make the trip possible—was amazing.” Having her grandfather at her side was the most special part. The trip also included a visit to the Vietnam Memorial and other significant sites, plus placing a wreath at the Tomb of the Unknowns. Rachel’s friend Congressman Hall also met the veterans at the memorial.

“Then we had a heroes banquet for them,” Rachel said, smiling broadly. “Everywhere they go during the trip, we arrange huge receptions, with people to clap and honor the veterans and thank them for their service. I saw the appreciation in the vets’ faces. None of them ever asked for it, but it’s great to give them the rock star treatment they deserve.” 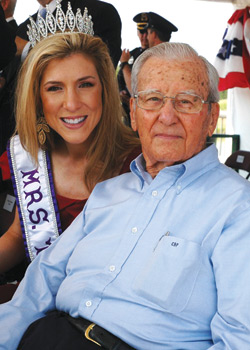 Rachel said the Mrs. Texas International program is service-oriented and attracts a person who thinks big. “It takes a certain kind of person to be willing to step out in a sparkling tiara,” she laughed, explaining that the pageant’s contestants come from all walks of life, from former Marines to those in fashion and women in the corporate world.

Rachel came to Austin College to become a doctor. Her career choice was inspired by her childhood experience with Guillain-Barre Syndrome, staying home from school an entire year. At Austin College, Rachel “majored in Carol Daeley” (that’s English, as most every Austin College student of the past 39 years knows) and decided to use her talents as a writer and storyteller rather than as a physician.

But she hasn’t forgotten her childhood hospitalization and remembers the magic of a hospital visit by a pageant queen. “Children always want to know how I got my crown, and I tell them that by having a dream and doing well in school, they can make a difference,” Rachel said. “I talk to them about going to college, too. Who knows? I may be influencing the next mob of ’Roos.” Rachel makes many appearances as Mrs. Texas and takes each interaction seriously, explaining, “My crown and sash may have the power to change someone’s day.”

Rachel and her husband, Eric, have some interesting pastimes, like autocross, road course racing, the highest speed racing done at the amateur level. “I love the spirit of competition and I love that each time you go around the track, you can do better and better, striving for a personal best every time,” she said. “And, there’s not much else you can think about while traveling 120 miles per hour! It keeps you focused on the task at hand.” Rachel also has earned a private pilot’s license.