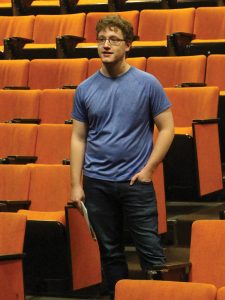 Jacob Dowell ’18 spent much of summer 2017 thinking about one weekend in November: the dates The 39 Steps, which he would direct, would play in Austin College’s Ida Green Theatre. In fact, he estimates he spent some 300 hours thinking about it before the curtain raised opening night. Theatre faculty offered him the opportunity to direct based on his work in the directing class in fall 2016. He chose a parody with all the elements of a spy thriller, something he called “challenging but fun.” English playwright and comedian Patrick Barlow wrote the stage adaptation of the 1915  novel by John Buchan, which also became the classic 1935 movie by Alfred Hitchcock. 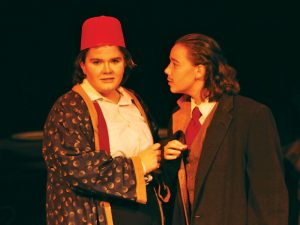 Jacob is completing majors in theatre and computer science. The first happened naturally as he enrolled in classes he enjoyed. He chose the second after taking a computer class and finding he  was good at it and liked it. This hybrid education path is the perfect combination to move him toward his career goal as a video game designer.

“I initially thought there was not a lot of overlap,” Jacob said. “But one of my professors introduced me to author Brenda Laurel and her book Computers as Theatre. It essentially said theatre is  the closest form of media to video games and that the lessons learned from the theatre could and should be transferred to video games. So, game design ended up being not only something that I  am passionate about already but also the natural progression of my path of study.”