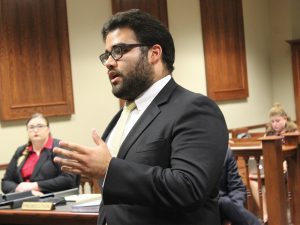 Nicolas Rodriguez ’19, captain of the “A” squad, ranked in the top five for Best Attorney in tournaments at University of New Hampshire and at Baylor University. Khaliah Owens ’21 was  recognized as a Best Witness in New Hampshire’s Annual Wildcat Invitational, and Anna Long ’21 earned that distinction at Baylor’s Green and Gold Tournament.

In Durham, North Carolina, the “A” squad achieved Honorable Mention, finishing seventh of 20 teams; the “B” squad, composed almost entirely of new participants, finished the tournament near  the middle of the competitors.

In January, the ’Roos host the first Austin College – Texas Tech Mock Trial Invitational at Austin College in the Kenneth Street Advocacy Courtroom in Abell Library. More than 12 teams from  across the country are expected to compete in the Kangaroo Brawl.

“Mock Trial students at Austin College are very appreciative of the vision and generosity of the alumni and friends whose gifts made the beautiful Kenneth Street Advocacy Courtroom available to  our programs,” Rodriguez said. “They will proudly tell you that the Austin College courtroom is one of the nicest facilities we see in our travels around the country—rivaled only by those at law schools.”