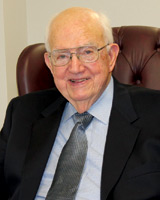 When Emmett Essin ’40 makes a trip to the grocery store, he frequently receives hugs from other shoppers—with whom he has a unique relationship: “You delivered me!” is often the accompanying greeting.

That could happen a lot. Dr. Essin isn’t sure how many babies he has delivered, but presumes the number to be between 5,000 and 6,000, considering his training and medical school years, work in a Naval hospital, and the 50-plus years he operated an obstetrics/gynecology practice in Sherman.

Since Austin College is celebrating 100 Years of Science education, Dr. Essin was a good person to talk to about some of those earlier years in the sciences. Though he graduated from Austin College more than 70 years ago, Dr. Essin remembers his own college experiences well.

Campus life was much different in the 1930s than in 2012, but the College’s reputation for preparing students for medical school already was well established. That’s what brought Essin to the College. His mother was seriously ill when he was a young child, and he made the decision then that he wanted to become a doctor. Throughout his high school years, he talked to his own family doctor about the types of courses he should take to prepare for college and then to continue on to medical school.

That’s exactly what he did.After graduating from Austin College with a major in biology and chemistry, he attended University of Texas Medical School at Galveston. After a stint in the military, he returned to Sherman and formed an obstetrics/gynecology practice. He retired from that practice 15 years ago, but has now been on staff for 66 years at Texas Health Presbyterian Hospital – WNJ (formerly Wilson N. Jones Hospital).

At 92 years old, he still goes into the hospital every day where his roles include chairman of the credentials committee, a member of the bioethics committee, and physician for the case managers, which involves consultation on the duration of patient stays in the hospital.

But, back to earlier days.When Dr. Essin attended Austin College, he didn’t live on campus as he was from the local area. He managed to be very involved with campus life nonetheless. All alumni from the period will tell you that the students of the era had no money, were paying out their tuition, and many had to work on campus. Many of the faculty had little money, either. “But there were a bunch of good and smart people,” Dr. Essin said.

He recalled football, basketball, and track teams; dances; wiener roasts; and bonfires. And, again, like nearly all alumni from the period, he shared stories of pranks that seemed to have been fairly commonplace in the era: a cow in the basement of Thompson Hall, an outhouse placed on the second floor of the Skeleton (the steel structure of Caruth Administration Building that sat dormant for several years). With all the fun, he recalled excellent programming brought to campus, including as examples, a news correspondent who gave students a glimpse into what was happening in Germany and a Presbyterian minister who served as the minister to the Texas Rangers (the law men—the baseball team was not yet established!).

Dr. Essin said he remembered very well those who were his faculty. “Dr. Dean Moorman was the head of the Biology Department; Park StreetWharton was the chemistry professor.All the science courses were held in Thompson Hall. Dr. Essin described the chemistry lab in his days as very good and the biology lab adequate, with all the equipment that was appropriate. But, he said he had excellent preparation from his faculty—Dean Moorman in biology, Park Street Wharton in biochemistry and chemistry, and Walter Steffey in physics. And that preparation was evident when he went to medical school.

Though times have changed, the foundations of campus life and community remain the same. “I think one of the prime things that we had in school here was the closeness of the students to the faculty,” Dr. Essin said. ”If you had a question, you could sit and talk to faculty; they’d invite students to their home to talk. They were interested in the student individually. That’s invaluable.”

Dr. Essin, named an Austin College Distinguished Alumnus in 1987, also had experience as an Austin College parent, as his sons are graduates. During the years his sons were in school, Dr. Essin recalls they always had two or three extras at suppertime, but that it was a fun time. Today, son Emmett ’64 is a history professor, and Robert ’65 is a lawyer.

Living in Sherman, Dr. Essin continues to watch the changes on campus with interest. He has seen presidents come and go and board members come and go, but always with advancements and good programs. “Austin College is a wonderful school,” he said, “one that will live on because of the kind of leadership it has.”

Dr. Essin received his orders to report to the U.S. Navy in 1945. By the time he left home, the war was over, and his primary duty was on the USS Ajax, a repair ship. He said it was “quite a show” when the ship was sent out to test the atom bomb, the fourth atom bomb explosion. His ship was eight miles from the target ship. “Our instructions were to turn away from the ship until we heard the blast. At eight miles, it nearly knocked us off our feet.”