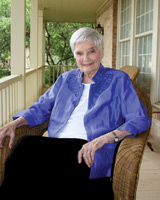 Several individuals with Austin College ties were among the honorees at the Presbyterian Communities and Services Foundation annual Each Moment Matters luncheon in October. The honorees, according to foundation materials were an “inspirational group of quiet heroes whose lives and actions embody the mission of the foundation to make each moment matter.” Criteria included compassion and excellence in daily living, faith in serving with joy, gratitude, respect, and kindness; courage in empowering and educating others; and the highest levels of integrity.

The honorees and their Austin College connections:

Congratulations: Not only was Sara Bernice Moseley one of the Each Moment Matters honorees this fall, she celebrated her 95th birthday in August. She was 34 when her late husband, John D. Moseley, became president of Austin College. She still delights in watching campus activity from her front porch just across Grand Avenue.