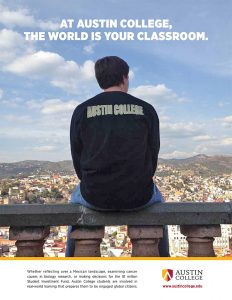 Sharing U.S. language and culture and soaking up the history and norms of other countries are the main responsibilities of several students over the next months, thanks to international scholarships and awards.

The awards went to students in the East Asian Languages and Cultures (EALC) program, plus one in the French Department.

Boren Scholarships, sponsored by the National Security Education Program, focus on geographic areas, languages, and fields of study deemed critical to U.S. national security, including not only traditional concerns of protecting American well-being but also the challenges of global society. In exchange for the scholarships, Boren recipients agree to work in the federal government for at least one year. In 2015, 172 awards were offered from a pool of 750 applications.

One-year Japan Exchange and Teaching (JET) positions were awarded to Kenna Scamardo ’15, Shelby Turner ’15, and Priscilla Wolfe ’15. Wolfe was offered a U.S. State Department Critical Language Scholarship, but had to decline it due to scheduling conflicts with the JET position.

Brigette Wolf ’15 received an English Teaching Assistantship at the Academy of Aix-Marseille through the French Ministry for National Education.

“A list like this would be impressive at an institution five times our size,” said Jennifer Johnson-Cooper, assistant professor of Chinese and campus Boren representative.

She and Scott Langton, associate professor of Japanese, worked extensively in the fall with EALC students on applications and processes, and are delighted at their students’ successes.