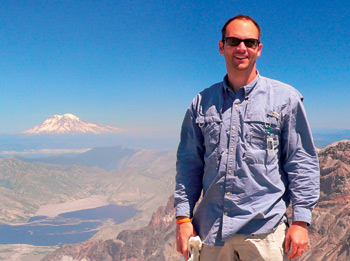 David Baker, Austin College associate professor of physics, was included among “The Most Creative Teachers in the South” in the August 2011 Oxford American magazine.

The article preface reported, “We hunted in colleges throughout the region to find influential educators admired by their students and colleagues, whose classrooms serve as forums for social change, whose homes become their classrooms, and, in some cases, whose assignments become homes.”

Baker definitely is excited about teaching, which for him includes traditional physics courses as well as interdisciplinary courses in earth, environmental, and planetary sciences. “One of my goals is for science to be cool and exciting for everyone,” he said in the article, “whether they will plan to pursue a career in science or a career in something else.”

Baker routinely leads adventure­-oriented science courses during January Term to places like the Galapagos, New Zealand, and Peru. In January 2012, he and Mike Fairley of the communication faculty had scheduled “Into the Wild Africa: Scientific & Cultural Perspectives of Nature,” planning to journey with students through the Great Rift Valley of East Africa with nature itself as their classroom. The class, cancelled due to safety concerns in the region, was to include camping on the African plains and hiking up Mount Kenya, Africa’s second­-highest mountain, as well as doing some roof and wall repair, and installing a new rainwater catchment system, at a school in the village below Mount Kenya.

The September 2010 release of The 50 Most Extreme Places in Our Solar System, co-­written by Baker and a colleague, highlights another area of Baker’s exciting interests.

From the physics lab to the wilds of Africa to the solar system, Baker keeps finding bigger realms in which to share his love of science with his students.