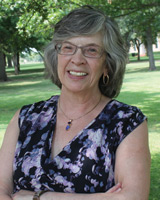 For the past 35 years, the Austin College campus has served as something of a research lab for Karen Nelson. From 1977 to 2007, she mostly taught full time in the Psychology Department, specializing in lifespan development, young adults being a particular focus of her study. For the past five years, she has taught only one course each term while serving the College as associate vice president for institutional effectiveness, collecting and examining data about those same students and alumni, as well as college programs and projects.

Now she is turning her focus to other labs, having retired from the College last month. For the next year, she will consult on a few Austin College projects to see them to completion and has promised to assist on an assignment or two, but those are just tying up loose ends.

Come summer 2013, she will be living in southern Maine, just an Amtrak stop from the Boston area she calls home, having completed her undergraduate degree at Clark University and her master’s and doctoral degrees at Harvard University. To make Maine even more appealing, two of her three children live in the area. And then there’s the weather. Since she will be moving from Texas in the summer, not much more need be said. (Her California-born husband, however, is a bit concerned about the winters.)

The pair of psychologists likely will address those concerns easily. Much of Karen’s work has been problem-focused, she said. In her role in administration, she collected and pored through all sorts of data about the College, determining ways to assess programs and means to articulate the findings. One aim was to “keep the College honest,” she said. “Are the things we claim about Austin College true and accurate?” Another of her goals was to ensure that when someone had a question about College data, there would be one answer and a means by which that answer could be retrieved.

One of the “answers” that appeared in the data was somewhat unexpected. “What surprised me most was the diversity of the campus, not only in terms of ethnic and racial diversity, but also socioeconomic and religious diversity and all the things that make a place as small as we are a really interesting community.” Karen was pleased to find that Austin College students, unlike students at some peer institutions, show an increasing openness to others over the four years.

“When I talk with our seniors, they are describing multiple networks they have created for themselves and are continuing to find interesting ways to discover how different the world can be,” she said.

As a pre-teen, Karen told her mother she was interested in finding out how four siblings can be raised together in the same family and be so totally different. “That’s what a psychologist does,” her mother told her—and her path was set. Karen knew she would love to study and research, but expected teaching to be “the price I would pay to do what I found interesting.” Another surprise: she absolutely loved teaching.

She found teaching to be her greatest satisfaction, and student accomplishments, her greatest pleasure. Her first faculty position was at a large university where she said the attitude was “we’re glad you like to teach, but no one cares,” and the priority was research and publication. She was pleased to find a better fit at Austin College. “But I don’t think I expected to enjoy it as much and have the opportunity for as great a variety of things as I have been able to do here,” she said.

In her role in administration, she has continued to teach, but to a different audience. The role, she said, allowed her to wean herself from teaching. “It would be much harder to walk away if I were walking away from the classroom,” she said.

Beyond the College, Karen calls her interests “predictable”; she enjoys cooking, photography, crocheting, walking her dog, being outdoors when she can, and “being Nana to two gorgeous granddaughters in Austin.”

Once she and her husband make the move to Maine, Karen does expect to do some writing and has some things on her professional to-do list she hasn’t quite finished. “But,” she said, “I do look forward to having those days, when you wake up and there is nothing you have to do before the day is up.”

Karen’s faculty colleagues hope to fund an endowment in her honor that will facilitate collaborative student-faculty research and presentation opportunities. “If someone had asked me what I would want them to do for me, that is what I would have told them,” Karen said. “No one asked, so I guess they know me well.”