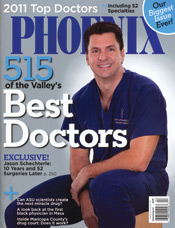 The Austin College Class of 1984 includes two graduates named John Williams. John D. Williams went to seminary and after completing his degree, returned to Austin College in 1993 to work in the religious life program, now serving as chaplain.

John L. Williams headed to medical school at Texas Tech University and then completed residencies in El Paso and Houston in general surgery and hand surgery. He moved to Michigan for a fellowship in plastic and reconstructive surgery and upon completion, began work in a group practice there. In 1999, after visiting family in Arizona in the midst of a Michigan winter, he and his family decided to move to Scottsdale, where he opened his own practice as a plastic surgeon. Last year, he was honored to be named by his peers as one of the top doctors in the Phoenix area by Phoenix Magazine. Not only was he a top doctor selection, he was chosen for the cover of the magazine.

Early on, his focus was reconstructive surgery, specializing in facial trauma, cancer reconstruction, and hand surgery. More recently, his work has turned toward the aesthetic aspects of his specialty. “When doing a lot of reconstructive work, any time I could help to restore form and function from a traumatic accident such as a dog bite or a disfiguring tumor removal, there was a certain type of reward in that,” John said.” It’s different on the aesthetic side, but the goals are the same: to take care of people and get them back to where they were or where they want to be.”

But don’t think just cosmetic surgery. Like all plastic surgeons, he was trained to treat patients with cleft lips and palates, burn injuries, hand injuries, and complex craniofacial deformities. And there’s an art to the work. “I was drawn to the field of plastic and reconstructive surgery because of its diversity and the ability to combine art with science,” he said. “Many types of surgery are black and white. In plastic surgery, there is an artistic aspect to any procedure I perform. Every day, I deal with creating or reshaping the aesthetics of the human form in regards to proportion, scale, symmetry, and balance, much like a sculptor. Critical thinking and complex problem solving, skills I first learned at Austin College, definitely come into play as I am always working with the multidimensional shapes and forms of the human body. ”

When he’s not working, Williams has plenty to keep him busy. He is married to his high school sweetheart, Laura (Needle), who is a 1983 Austin College graduate and works as an accountant in Phoenix. They have three sons—Adam, a rising senior at Duke University; Ryan, who will be a sophomore next year at University of Notre Dame; and Scott, a junior in high school. All three have been able to combine their academic success with varsity sports such as basketball, track, and cross country.

Williams hasn’t been back to campus in some time—a busy practice and family life have kept him occupied— but his friendships with Austin College classmates remain strong. “I made lifelong friendships at Austin College,” he said. “Classroom experiences and knowledge may fade away but those friendships last a lifetime.”

Still, Williams feels his Austin College education was excellent preparation for his career. Although his sons have looked in other directions for their college choices, Williams would “100 percent recommend Austin College.” He said, “The attention from professors, small classes, and high standards are very important and certainly help in medical school and residency.”

Considering the success Williams has found in his profession, that’s good advice indeed