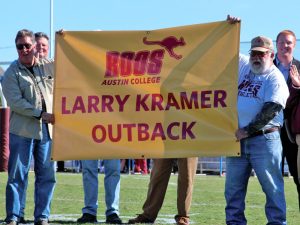 Alumni, parents, and friends who visit the tailgating area of Apple Stadium during football games next season could see many enhancements in addition to signage honoring the late, legendary Kangaroo football coach Larry Kramer.

Kramer, 71, died in January 2014, and his wife, Sandy, was on hand at Apple Stadium for the unveiling of the newly named area at Homecoming 2014.

A fundraising program is underway to create additional structures and landscaping in the Kramer Outback, including crepe myrtle and other trees, a pergola, and an improved barbecue area as well as benches and a walkway. Alumni and friends wishing to direct gifts to the Larry Kramer Outback may contact Ryan Britt, director of development, at 903.209.8526 or Athletics Director David Norman ’83 at 903.813.2499 for information. Gifts also may be made online by selecting Larry Kramer Outback on the dropdown menu.

Coach Kramer led the ’Roo football team from 1973 to 1982, guiding the team to the 1981 NAIA National Championship. His 50 wins at Austin College remain the second highest of any coach in ’Roo football history, and he finished his time in Sherman with an overall record of 50-43-6, including a 35-7-1 mark over his final four seasons. He left Austin College to become the head coach at Emporia State University in Kansas, where he coached from 1983 to 1994.

In 2003, Kramer was honored by Austin College with the prestigious Coach Joe Spencer Award for Meritorious Service and Lifetime Achievement in Coaching. 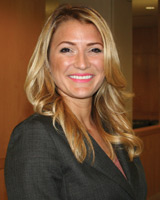 Austin College head women’s soccer coach Kristina Corona was selected from 600 applicants as one of 15 women honorees by the National Soccer Coaches Association of America (NSCAA) for its “30 Under 30” program, which also includes 15 men coaches. Launched in 2013, the program is a year-long education and mentorship opportunity for select “up-and-comer” soccer coaches.

Corona finished her first season on the sidelines at Austin College in 2013, coaching four players to All-SCAC honors, including two First Team All-Conference selections. This fall, her team fell to Trinity in the SCAC championship semifinals, ending the season with an 11-10 overall record.

“I strive to be a coaching instructor, and I want to be a role model for young women and coaches specifically,” said Corona, who played at the University of Tulsa and for two seasons in the Women’s Premier Soccer League for the Fort Worth Panthers. Before coming to Austin College, she coached at University of Dallas, where she was named SCAC Coach of the Year in 2012. 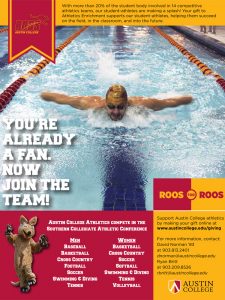 When the National Football Foundation and College Hall of Fame announced the six coaches on the 2015 ballot for induction into the College Football Hall of Fame, two former Austin College coaches were on the list: former head coach Pete Cawthon and former assistant coach Bill Snyder.

Cawthon coached the ’Roos from 1923 to 1927 before eventually moving to Texas Tech, and the award given annually to the top male student-athlete at Austin College is named in his honor. Cawthon had a record of 34-25-4 as the head man for the Kangaroos, and coached the ’Roos to the Texas Intercollegiate Athletic Association title in 1923. After 18 years as a head football coach, he compiled a record of 110-57-10, and eventually became the head coach of the National Football League’s Brooklyn Dodgers and then served as the athletics director at the University of Alabama.

Snyder, who coaches the Kansas State University football program, served not only as an assistant football coach but also the head swimming and diving coach for the ’Roos in 1974 and 1975. He went on to win 183 games as a head coach at Kansas State, where he served as head coach from 1989 to 2005, and then came out of retirement to begin coaching the Wildcats again in 2009. Snyder returned to Sherman to accept the Coach Joe Spencer Award for Meritorious Service and Lifetime Achievement in Coaching in 2007.