Football on the Rise

When the current group of Austin College seniors finished up their first season as Kangaroos, the team had a 0-10 record. Their sophomore season finished 2-8, and last year ended 5-5. The 2014 season also ended 5-5, with a four-win streak and a few close games that the ‘Roos couldn’t quite pull off. Still, the season revealed the team’s determination during a rebuilding period that made ’Roo Nation and head coach Loren Dawson ’91 and his staff proud. Thirteen members of the team were selected as All-SCAC performers, with nine ’Roos on the first team and four on the honorable mention team. 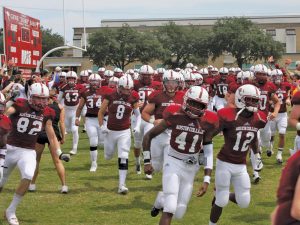 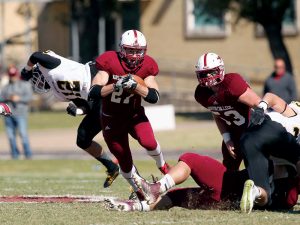 Recognition on the Field 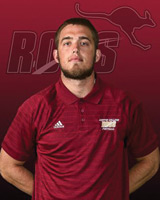 Kangaroo Kyle Crawford ’15 was twice selected to the D3Football.com National Team of the Week for outstanding performance during the season. A tight end, he finished second in the SCAC for receptions and first with 699 total yards. He also led the conference with 16.6 yards-per-catch and was third in the SCAC with four touchdown catches.

[After press time, Crawford was named to the D3Football.com All-South-Region Third Team for the second straight year. Over the past two seasons, he made 72 catches for 1,089 yards and eight touchdowns, with a career average of 15.1 yards-per-catch.] 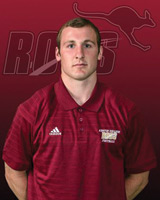 A business administration major, the player entered the fall term with a 3.92 cumulative GPA. In addition to excellence in the classroom, he has also been a standout on the field and twice during the season was named SCAC Offensive Player of the Week.