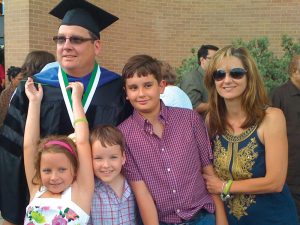 While a football player at Austin College, Tommy Newsom ’91 worked in sports information. He earned his Austin College degree with a major in marketing and communications. His education and experience set him on his professional career.

In December 2010, he earned a Ph.D. at the University of North Texas, with a concentration in higher education administration. That comes in handy—since 2008, he has served as president of the Art Institute of Dallas.

It’s been an interesting journey.

After graduation, Newsom was named assistant director of sports information at Northwestern State University in Louisiana, and also worked with the Louisiana Sports Hall of Fame. A few years later, he moved to a similar position at Baylor University, and then advanced to the director of media relations for the Southland Conference.

From there, he moved into the newspaper world, For two years, he owned and published the Little Elm Journal then became an editor for DFW Community Newspapers, responsible for one daily and four weekly newspapers.

He earned a master of science in education degree at Texas A & M Commerce in 1998, with a concentration in secondary and higher education and a minor in student personnel services

Newsom’s next stop took him back into educational promotion when he became director of public relations at the Art Institute of Dallas in 2002. He made a move to serve as dean of student affairs at the school before becoming assistant vice president, then vice president for student affairs, with Education Management Corporation.

Between positions at that company he served as interim president at the Art Institute of Tennessee – Nashville. He must have done well. In 2007, he became president of The Art Institute of Austin and in December 2008, returned to The Art Institute of Dallas to assume the presidency there. He also is vice chancellor for art institute operations at South University in Dallas, responsible for the academic quality and operational effectiveness for the College of Creative Arts and Design.

Throughout his career, Newsom has been active in various community organizations and activities. He also served as a board member for the Austin College Greek Alumni Council.