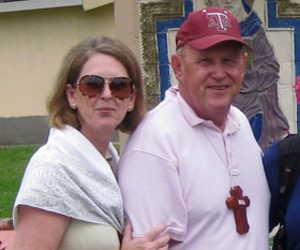 The team of 32 missionaries was not preaching the gospel, but living it—offering veterinary treatment to some 6,000 domestic animals and providing public health teaching for hundreds of children who received toothbrushes and soap to put the teaching into action.

Additionally, through The Owen Project the group is working toward to provide a computer to each child in Honduras, starting with the school in Santa Rosita. The group raised enough money to provide 100 computers this year. Even in areas where there is no electricity, the project will providing rugged, wind-up computers designed by an MIT professor for children of third world countries, where most children do not have paper, pencils, or textbooks. Connections with Honduran government officials have resulted in no-cost internet signal for many in the areas served by the mission team.

Bill and Lynn began the annual trip after an Episcopal bishop from Honduras visited their church and shared the needs of the country’s residents. He assured them that any sort of help would be appreciated. As a veterinarian, Bill knew one way he could help. He, Lynn, and three of his colleagues made a trip 25 years ago; they were overwhelmed with the need.

Now, the annual trip includes 24-28 veterinarians, plus other staffers, who treat some 6,800 animals in four days. Much of the work is preventative care that will keep the animals healthy. “Animals are so important in this region,” Bill said. “Survival sometimes depends on the health of their animals.” Four teams of veterinarians treat animals in the town and in the surrounding mountains. Lynn, a former teacher, and other volunteers educate children about public health issues to help the human residents stay healthy.

Bill said the group is always in need of adult and student participants interested in mission work, veterinary medicine, education, and public health as well as those able to work with computers. Spanish-speaking volunteers are needed to work on an introduction to the One Laptop One Child learning system, though The Owen Project has partnered with a university in Honduras that will send volunteers to help teach children to use the computer.

After 25 years (and a correlating 200,000+ animals), Bill is still planning for the next trip. “Early on, in about the third year, I was nearly ready to give up,” he said. “We were working and a woman walked into the town with her animals and told us she had begun the trip, driving the animals down the trail, at 6:30 that morning. She arrived at 2:30. She said that after seeing us the previous year, she hadn’t lost one animal so the long journey was worth it.” … Bill didn’t give up.

Anyone interested in taking part in the trip, scheduled the week before Memorial Day each year, can contact Bill Campaigne. Volunteers have come from all walks of life and from around the globe.

See photos and read a brief summary of the 2011 trip, provided by Bill Campaigne and written by Dr. Valerie Kirk. 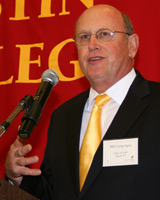 Many Austin College alumni and students, in addition to the Campaignes, have participated in one or more of the week-long trip over the past 25 years. Bill thanks Jack Pierce, Austin College health sciences advisor, for informing students about the opportunity. In 2010, alumnae Abby Smith and Paige Rutherford joined the group, along with Ashley Hagauer, Class of 2011 and a current student at Texas A & M School of Veterinary Medicine. Following the 2010 experience, Ashley wrote about what she had seen and learned. Read her comments.

Note: Bill earned a Doctor of Veterinary Medicine degree in 1976. He is a partner with Seguin Animal Hospital in Seguin, Texas, as well as Lone Star Laboratory Swine and SCH Enterprises. Bill and Lynn Marie have two children and live in Seguin, Texas. He was named an Austin College Distinguished Alumnus in 2007.