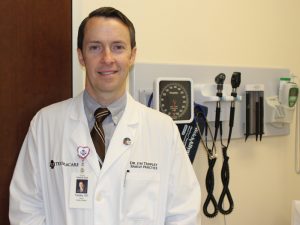 Dr. Jim Tarpley ’93 is about to launch an exciting new program with a group of young doctors. He doesn’t anticipate the drama of Grey’s Anatomy, but he knows that serving as the director of the Texoma Medical Center (TMC) Family Medicine Residency program will bring many new challenges. The program, which launches in July 2015, is in partnership with the University of North Texas Health Science Center (UNTHSC).

Since then, he has practiced family medicine through the Texoma HealthCare System, with an office in Bonham, Texas. He grew up there and was proud to return to serve his hometown. He has treated an average of 450 patients per month since 2003, offering care to newborns through geriatric patients, and has done all sorts of procedures and therapies along the way. 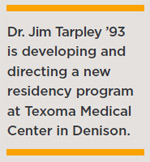 Once he was approached by TMC and UNTHSC to direct and develop the residency program, he moved his practice from Bonham to the medical building next door to the hospital. Though he will not see the number of patients he has in the past, Tarpley will be “doing what I’m teaching and teaching what I’m doing.”

Residents, Tarpley explained, come in with a good knowledge base of medicine. “Residency,” he said, “is about learning to manage the patients and put their knowledge into action. Part of my role is to see that they gain a level of confidence. They will certainly have an advocate in me.” He added that it is important also that they learn the business of medicine and the role of community service.

Community service is something Tarpley knows well. Since his student days at Austin College, he has worked and volunteered at Camp Sweeney, a camp for children with diabetes, in Gainesville, Texas. He more recently has been involved in medical/evangelical mission trips to India. And he see the potential for trips with residents in the future. 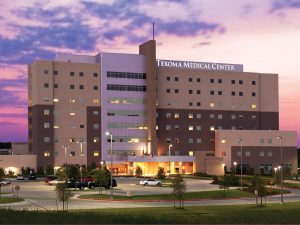 Tarpley said in addition to his work serving to model medical care for residents, it is important to him that his compassion be on display to the young doctors. “I have a strong belief that to wear a white coat is not a prestigious honor but a blessing,” he said. “I’m compelled to take my blessings or talents and invest them in the lives of the different people that intersect with my life every day.”

Though the residency program is just getting started, Tarpley already is thinking about how he can work with Austin College pre-medical students as well and ways to integrate students into some of the teaching opportunities for residents. He recalls his own undergraduate days and decisions about what to do with the rest of his life. The reputation of the pre-medical program led him to Austin College, even turning down a full-ride scholarship at another school to seek an Austin College education. “I just felt the pre-med training would be better. The College has a great reputation and Jack Pierce, Health Sciences advisor, is very protective of that reputation,” he said

Medical care is a team operation, Tarpley said, and family medicine doctors are the quarterbacks of the team. “They call the ‘shots’,” he laughed, pun fully intended.