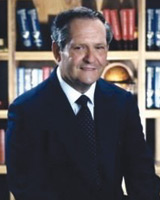 The Austin College community was saddened to learn of the death on September 29 of senior trustee Joe F. Rayl ’54.

Joe joined the Austin College Board of Trustees in 1988, and following his term, he continued on the Senior Board until his death. He was a longtime supporter of Austin College projects, with gifts toward building renovations, annual fund, capital projects, and several athletics projects, in addition to gifts toward the renovation of Wortham Center, the Harry E. Smith Art History Chair, and the College’s Volunteer Leadership Assembly.  He was inducted into the Austin College Athletic Hall of Honor in 1981.

Joe and his family had lived in Bolivar, Missouri, since the 1960s when he purchased a petroleum distributorship there. A few years later, he purchased a small bank in Greenfield and spent the next 40 years in banking and building community banks throughout southwest Missouri.