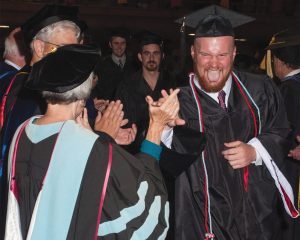 The rain that devastated parts of Texas in May sent Austin College’s Commencement ceremony inside for the first time in more than 20 years. Bagpipes and columns of faculty applause still ushered in the senior class, and the rain could not diminish the achievements of the Class of 2015 nor the immense satisfaction as some 300 seniors received diplomas from President Marjorie Hass. In addition, 20 graduates received Master of Arts in Teaching degrees.

President Hass also awarded honorary doctorates to the Honorable Wallace B. Jefferson, former Chief Justice of the Supreme Court of Texas and the Commencement speaker, and to the Reverend Patrick McCoy, senior pastor of Trinity Presbyterian Church of McKinney and Baccalaureate speaker. Honorary doctorates also were awarded to Catherine “Kiki” (Moore) McLean, a Class of 1985 graduate who has made her mark as one of the top public affairs strategists in the country, and two legends of Austin College academia: Dr. Clyde L. Hall, professor emeritus of economics and business administration and a 1946 graduate of the College; and Dr. Kenneth W. Street, professor emeritus of political science. 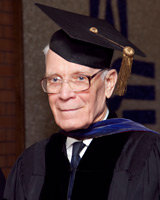 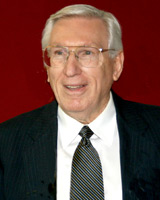 Each year, the faculty selects two outstanding scholars in the graduating class for special recognition at Commencement, with no distinction between them, as recipients of the J.C. Kidd and J.M. Robinson Memorial Scholarship Medals. 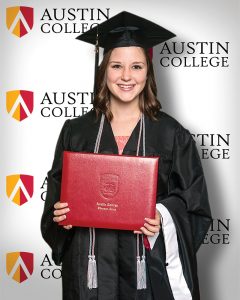 The Kidd Medal was presented to Bliss Froehlich of McKinney, Texas, who completed a major in communication studies and a minor in educational psychology. She is pursuing a Master of Art in Teaching degree through the Austin Teacher Program; this fall, she will begin a job as kindergarten teacher at Riddle Elementary in Frisco ISD. 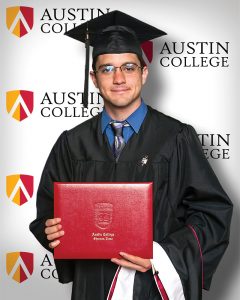 The Robinson Medal was awarded to Christopher Burke of Denton, Texas, who completed majors in German and political science and a minor in environmental studies. This fall, he will travel to Rostock, Germany, for a Fulbright English Teaching Assistantship. Later, he is considering graduate school but unsure of the specifics. He said that a highlight of his Austin College experience was January Term, particularly a course in prairie restoration that influenced his decision to minor in environmental studies. He continued that study with an internship in Selah Bamberger Ranch Preserve. He also interned with Judge Jim Jordan in the 160th Civil District Court in Dallas.

Taylor Crouch of Round Rock, Texas, spoke on behalf of his fellow graduates, asking “What’s next?” and encouraging his classmates that they have a responsibility to impact the lives around them. “Now,” he said, “we make this place a bit better than the way we found it.” In closing, he offered a traditional Presbyterian blessing: “‘Go out into the world in peace. Have courage! Hold fast to what is good. Return no one evil for evil. Strengthen the faint-hearted; support the weak; help the suffering. Honor all people.’ That is what’s next.” 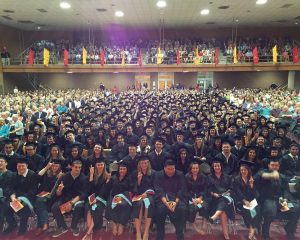 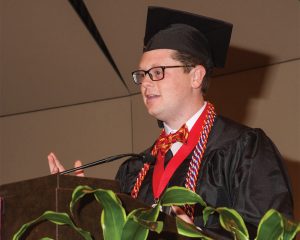 Senior speaker Taylor Crouch took a photo of his classmates from the stage to commemorate the moment of his speech. 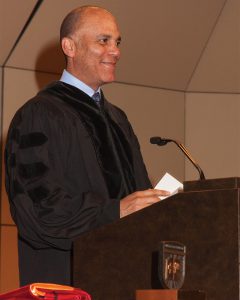 In his address, “A Consequential Life,” Justice Jefferson looked to the writing of Frederick Douglass for inspiration for graduates, quoting: “Education means emancipation. It means light and liberty. It means the uplifting of the soul of man into the glorious light of truth, the light only by which men can be free.”

“A liberal education is not an end in itself,” Jefferson told the graduates. “It must be deployed to combat ignorance and oppression. It will be your foundation to build a life of consequence.”

He encouraged his audience to consider how they will devote their achievements to the good of others, adding that in addition to light, sometimes fire and storm are needed to create change in situations. “You are superbly educated and now going out into the world. You will witness in your lives a discord between the ideal of liberty and justice for all and the reality that we as a society fall short.” Jefferson said that in these failings is opportunity for service. “Help your city, your state, and our country to extend the blessings of liberty to all. Use the fire of your education to expand the rights of everyone you touch. A gentle rain will help replenish those rights, but a storm will fill the reservoirs of justice for decades to come.”

President Hass sent the alumni out with her own challenge: “Keep this place and its people close to your hearts. You are bound to us—and we to you—by strong ties of commitment to knowledge in the service of justice, to community that celebrates differences, and to the blending of a local and global vision.” 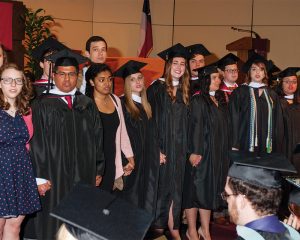 In closing, the A Cappella Choir performed what has become the traditional Austin College benediction: “The Lord Bless You and Keep You,” sending the new alumni forth to take on the world.