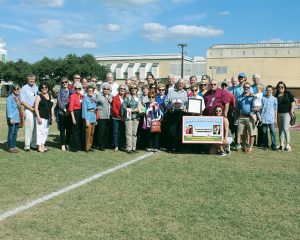 “We are blessed at Austin College to have many dedicated alumni but none more so than the late Jerry Apple ’60,” President Marjorie Hass told a large group of alumni and friends present for a luncheon October 29 in celebration of “Jerry and Joy Apple Day.”

“Jerry loved Austin College and he loved Austin College athletics. Though we miss him on the upper deck of the football stadium cheering on the ’Roos, we are pleased that his name lives on in Apple Stadium. Though Joy Apple graduated from the University of Texas, she has been a part of Austin College since she and Jerry married in 1971. She has probably attended more Austin College dinners, football games, and other gatherings than most of our alumni! We are so grateful for their devotion and their investment in our mission of educating talented students.” 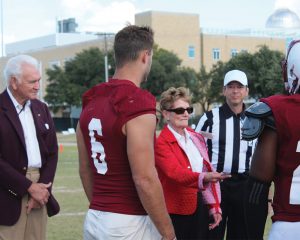 Joy shared that the celebration was happening 60 years after Jerry arrived at Austin College as a freshman. She and Jerry met on campus; Jerry’s career began on campus; and many lifelong friendships were created on campus. She said she knew from the beginning that Austin College would be a part of their lives forever. Through the years, Jerry served on the Alumni Board and as a member of the Austin College Board of Trustees. Jerry and Joy have supported many campus programs and facilities over the years, most significantly Jerry Apple Stadium. 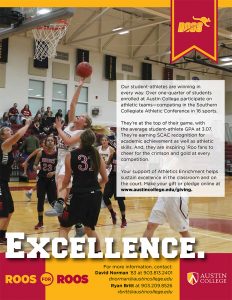 A few months before Jerry’s passing, he and Joy established the Apple Challenge for Coaching. Joy continues her commitment to match up to $50,000 per year toward the goal of $200,000 annually for five years to fund additional coaching positions at the College. To make a gift toward the challenge, email David Norman or Ryan Britt of Institutional Advancement or give online.